Background/Purpose Systemic lupus erythematosus (SLE) is characterized by the uncontrolled inflammation along with over produced inflammatory cytokines, among which type I interferon (IFN) is recognized as a crucial pathogenic factor. The expression of miR-146a, which plays a key role in negatively controlling both the innate and adaptive immune responses, is reduced in the peripheral blood cells of SLE patients and accounts for the overactivated inflammatory responses in SLE. However, the mechanism of the reduction of miR-146a is still not fully understood. Not only are miRNAs regulated at the transcriptional level, their biogenesis consists of complex posttranscriptional processing that is affected by many factors, some of which are indicated to be associated with autoimmune diseases and can even be regulated by IFN. In this study, we tested whether the key pathogenic cytokine of SLE, type I IFN, is responsible for the dysregulation of miR-146a through regulating its posttranscriptional processing.

Methods Gene expression was measured with RT-qPCR, northern blotting, or western blotting. MCPIP1 expression was knocked down in THP1 cells with a lentivirus encoding a short hairpin RNA targeting MCPIP1. Gene expression data for IFN-inducible genes, MCPIP1, and miR-146a in the peripheral blood cells of SLE patients was used in the correlation analysis.

Results The pretreatment of THP1 cells with type I IFN attenuated the induction of miR-146a by LPS. Further investigation revealed that this phenomenon happened at the posttranscriptional level, along with downregulated pre-miR-146a, but not pri-miR-146a or its original unspliced transcript. We then demonstrated that the expression of MCPIP1, which is reported to limit miR-146a maturation by antagonizing the function of DICER1, was enhanced by type I IFN. Knocking down the expression of MCPIP1 abolished the inhibition of miR-146a and alleviated the enhancement of the expression of inflammatory cytokines by type I IFN. Finally, we demonstrated that MCPIP1 expression was elevated in the peripheral blood cells of SLE patients and its expression correlated positively with the IFN score and negatively with the level of miR-146a.

Conclusion Our data suggest that elevated type I IFN inhibits the maturation of miR-146a and contributes to the reduction of miR-146a via MCPIP1 in SLE patients, providing new insights into the mechanisms by which the overproduction of type I IFN in SLE patients amplifies inflammation and even destroys immune tolerance. This knowledge may lead to more-specific therapeutic approaches, targeting downstream effectors of type I IFN. Our findings also indicate that the posttranscriptional regulation of miRNA maturation may be involved in the pathogenic process of SLE and may account for the dysregulated inflammatory gene expression in this disease. 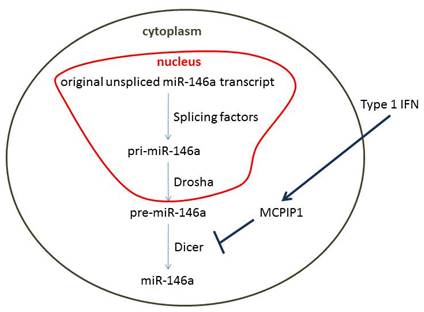