Background/Purpose: Individuals with inflammatory diseases (ID) have an increased risk of cardiovascular disease, frequently compared to that of diabetes mellitus (DM). However, the magnitude of risk for heart failure (HF) and potential etiologies of HF in ID have not been well described. We aimed to evaluate the risk of incident HF as well as its etiology in patients with ID compared to the general population with and without DM.

Methods: We linked multiple population-based health to construct a cohort of adults living in Ontario, Canada on January 1, 2011 and followed to December 2019. Patients diagnosed with rheumatoid arthritis (RA), ankylosing spondylitis (AS), psoriatic arthritis (PsA) and psoriasis (PsO) were identified using validated case definitions and matched by age, sex and geographic region with individuals without ID. We excluded all patients with a prior history of HF. The primary study outcome was incident HF defined as a first hospitalization for HF after January 1, 2011. Incidence rates of HF, per 1000 person-years (PY) for each exposure group were calculated. Hazard ratios (HRs, 95% confidence interval) for HF were calculated using Cox proportional hazard models, adjusting for demographics, cardiac risk factors and other comorbidities. The etiology of HF was descriptively classified in hierarchical order to mutually exclusive groups based on comorbidities prior to and at the time of HF hospitalization: 1) ischemic heart disease; 2) valvular disease; 3) atrial fibrillation; 4) hypertension/DM; 5) other.

In multivariable analyses, ID remained independently associated with an elevated risk of HF compared to non-ID subjects (HR 1.34, 95% CI 1.30, 1.38; Table 1); this relative risk was highest among subjects with RA and lowest in PsO. When stratified by DM, the risk of HF in ID was attenuated but remained increased (HR 1.11, 95% CI 1.06, 1.16). The leading cause of HF in all ID groups was ischemic heart disease (33%), followed by atrial fibrillation (27%), hypertension (23%), and valvular heart disease (12%) (Figure 2). The distribution of HF etiology was similar among non-ID comparators.

Conclusion: The risk of HF hospitalization is increased in patients with ID compared to the general population, but lower than in DM. Ischemic heart disease and atrial fibrillation are leading causes of HF hospitalization in ID. The effect of inflammation underlying ID on HF risk may be independent of traditional risk factors, such as DM. 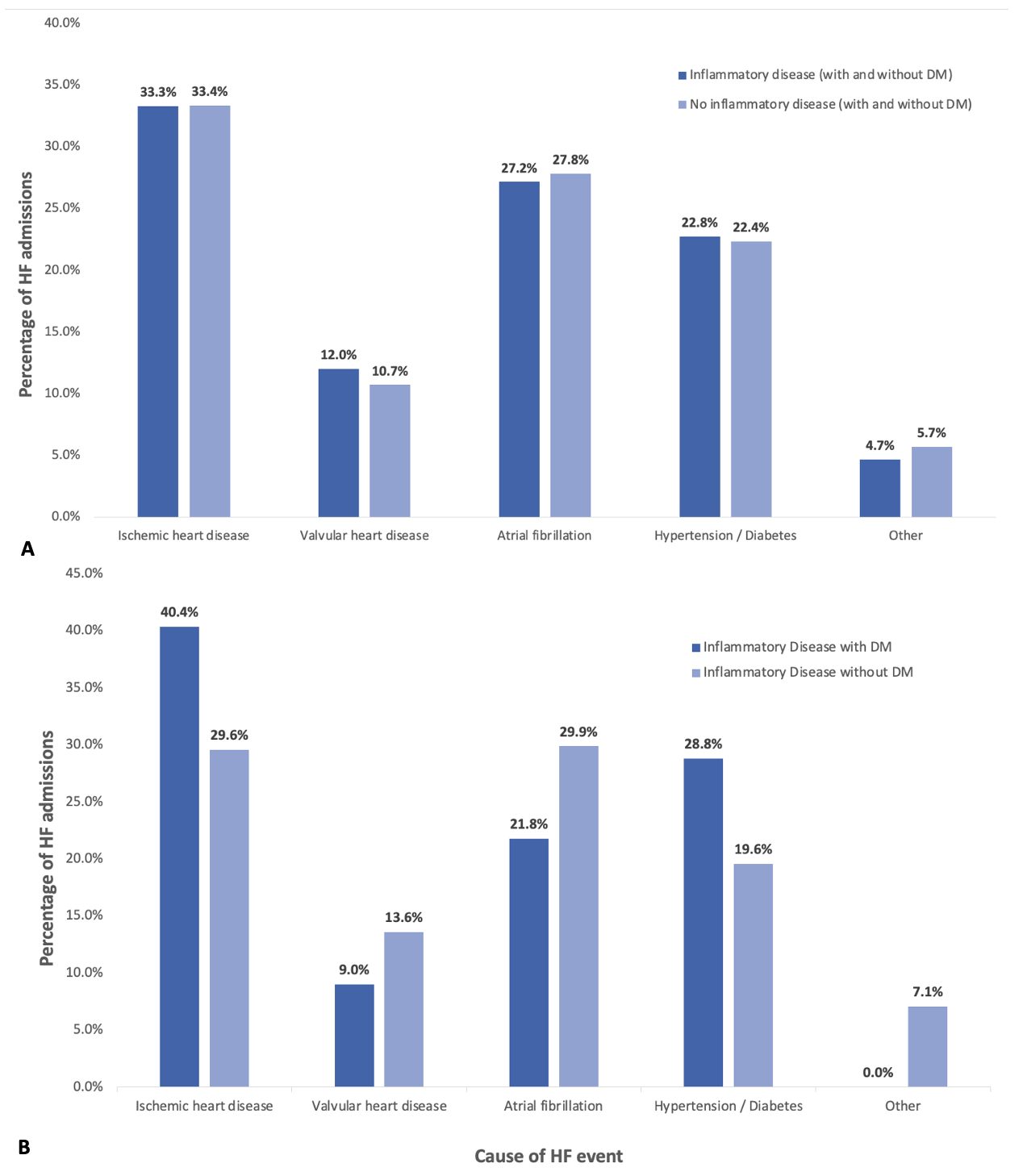