Background/Purpose: Established pulmonary manifestations of RA include restrictive processes such as interstitial lung disease and obstructive processes such as bronchiectasis, but clinically detected forms of these diseases are relatively uncommon. Emerging research suggests that airways disease may be common in RA and not explained by smoking. However, prior studies investigating the relationship of RA with restriction or obstruction were limited by small sample size, insufficient smoking data, or lack of a control group without RA. Therefore, we aimed to investigate the relationship of RA with type and severity of pulmonary function test (PFT) abnormalities compared to the general population, accounting for smoking.

Methods: We performed a cross-sectional study investigating the association of RA and PFT abnormalities among subjects who had PFTs performed for research purposes in the UK Biobank. RA cases were identified by self-report and current DMARD use (as previously published in this dataset). We compared RA cases to general population controls in the UK Biobank that denied RA and other systemic rheumatic disease. Outcomes were: continuous PFT results, type of PFT abnormality (restrictive pattern, obstructive pattern, and either abnormality), and level of severity (mild, moderate, and severe) according to standard clinical PFT cutpoints from population prediction equations. Covariates included age, sex, smoking status, and pack-years. We used linear regression to compare RA cases to controls for continuous PFT results. We used logistic regression to estimate adjusted ORs for type and severity of PFT abnormality, comparing RA cases to controls.

Results: Among 319,288 analyzed subjects with PFTs performed (mean age 56.4 years, 56% female, and 46% ever smokers), we identified 1,853 (0.6%) cases of treated RA. Among RA cases, 72% were female and 84% were RF+. Among the entire sample, 16% had restrictive pattern and 14% had obstructive pattern on PFTs. RA was strongly associated with lower % predicted forced expiratory volume 1 second (FEV1), % predicted forced vital capacity (FVC), and FEV1/FVC results than general population controls, independent of smoking and other confounders (Table 1). RA was also associated with increased odds of restrictive (multivariable OR 1.42, 95%CI 1.27-1.59) and obstructive (OR 1.28, 95%CI 1.14-1.45) patterns (Table 2). RA was associated with increased odds of either PFT abnormality (OR 1.41, 95%CI 1.28-1.56) compared to controls. RA was associated with higher odds of restrictive pattern across all severity levels and higher odds of moderate and severe, but not mild, obstructive pattern (Figure 1). Findings were similar among never smokers.

Conclusion: RA cases were more likely than general population controls to have restrictive or obstructive pattern abnormalities on PFTs obtained for research purposes, and this relationship was not explained by smoking and other measured confounders. The independent association of RA with obstructive pattern adds to the growing literature implicating RA and airways disease. In addition to restrictive lung disease, clinicians should also be aware that obstructive lung diseases may be a pulmonary manifestation of RA independent of smoking history. 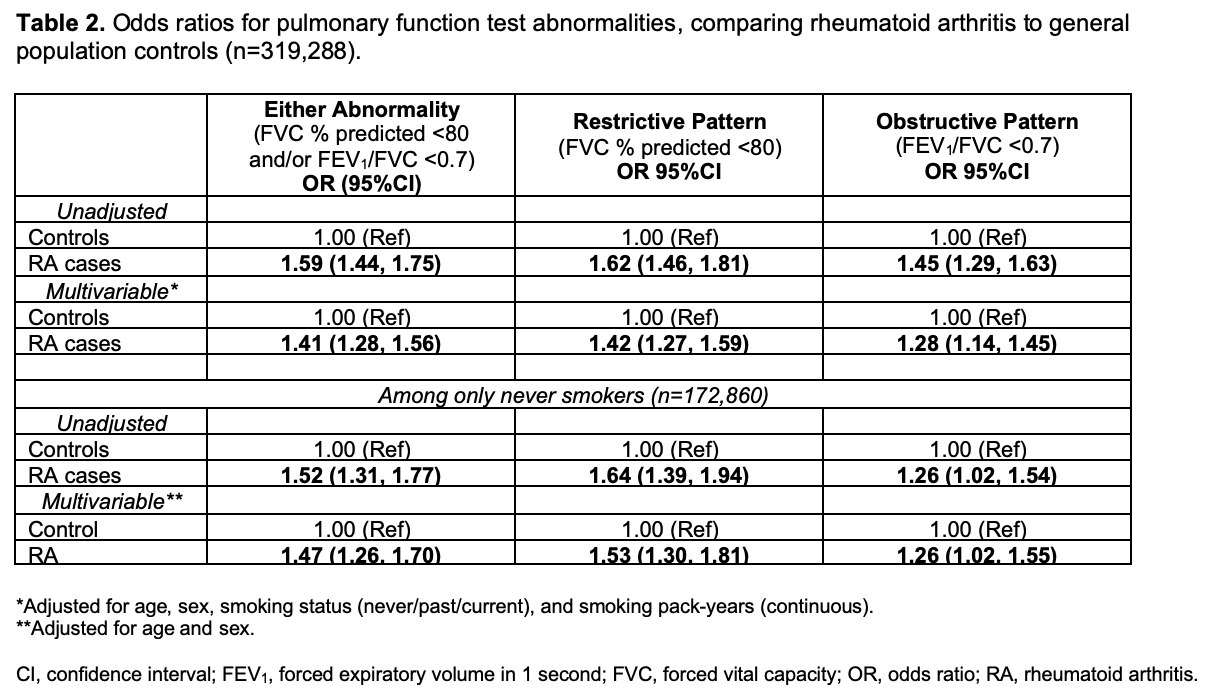