Methods: All patients who had an SLE related diagnostic codes or the following laboratory measures: anti-nuclear antibodies, anti-double stranded DNA, anti-Sm, anti-cardiolipin, anti-beta 2 glycoprotein 1antibodies, complement, coombs and lupus anticoagulant were identified using a population-based research infrastructure. Medical records were thoroughly reviewed from 1976-2018. LN was defined as patients who had either 1) biopsy proven LN in the presence of a positive ANA or ds-DNA antibody, or 2) meeting one of the following SLE criteria: ACR97, SLICC or ACR/EULAR 2019 and developing proteinuria (500 mg in 24hrs urine collection or protein/creatinine ratio > 0.5) that did not have a better explanation. Patients with diabetes or other causes of proteinuria were excluded.

Incident cases were defined as a patient who had been a resident of our geographic region for at least one year prior to meeting the case definition for LN. The incidence date was the earliest date that the patient fulfilled either case definition. LN class data was obtained from biopsy reports. Age- and sex- specific incidence rates were adjusted to the 2010 US white population. The 95% Confidence intervals for incidence rates were calculated by assuming the data follows a Poisson distribution.

Conclusion: Our report provides a population-based estimate on the incidence of LN in the United States previously unavailable. Furthermore, our data shows that the incidence of LN has doubled in the last four decades. Future studies are needed to explain whether these changes are due to increases in racial and ethnic diversity, better detection or environmental influences. 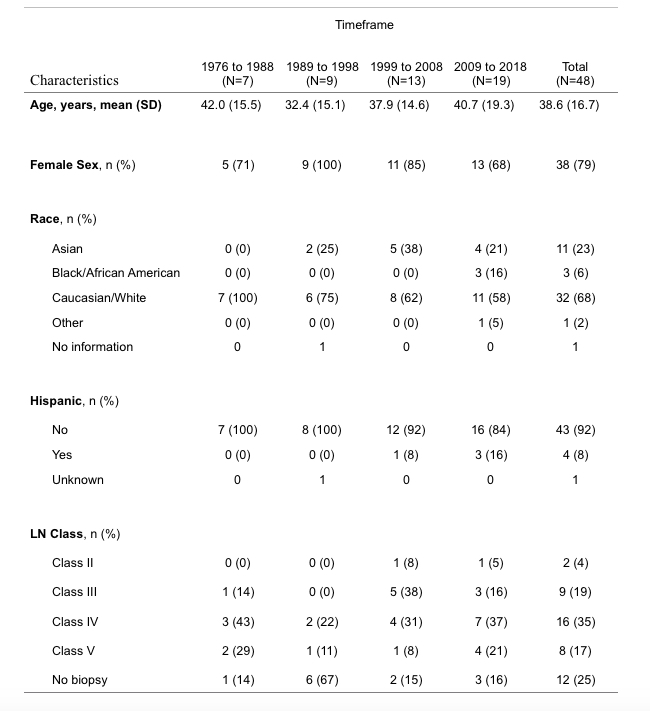