Background/Purpose: Based on inhibition of viral replication and limited reports on clinical efficacy, hydroxychloroquine (HCQ) was initially considered as a prophylaxis and treatment of COVID-19.  Despite this optimism, more extensive reports have significantly dampened the promise of efficacy, however cardiac toxicity has surfaced raising attention to this complication. Although HCQ is generally considered safe during pregnancy based on studies in patients with systemic lupus erythematous and other rheumatic conditions, this initiative leveraged a unique opportunity to evaluate neonatal electrocardiograms (ECGs) in the context of HCQ levels to address any potential cardiotoxicity.

Methods: Neonatal ECGs and HCQ blood levels were available in a recently completed study evaluating the efficacy of HCQ 400mg daily to prevent the recurrence of congenital heart block associated with anti-SSA/Ro antibodies. The ECGs of affected newborns who met the primary outcome of advanced block were not included in this safety study so that the results only reflect those infants with no clinical cardiac disease. Using the Bazett formula to correct for heart rate, corrected QT (QTc) intervals were calculated and compared to age-matched normal values. For reference, the median (2nd percentile – 98th percentile) values for QTc were 413 (378-448) msec in males, and 420 (379-462) msec in females. QTc intervals were recorded in the absence of knowledge of the HCQ levels. Values exceeding 448 msec for males and 462 msec for females were considered abnormal. Levels of HCQ were assessed during each trimester of pregnancy and in the cord blood, providing unambiguous assurance of drug exposure.

Results: There were 45 ECGs available for interpretation within the first 4 months of life in unaffected infants.  Overall, there was no correlation between cord blood levels of HCQ and the QTc (R = 0.02, P = 0.86) or the average value of HCQ levels obtained during each individual pregnancy and cord blood and the QTc (R = 0.04, P = 0.80), as shown in Figure 1A and Figure 1B. Likewise there was no correlation between the average of the maternal HCQ levels obtained at each trimester and delivery plus cord levels and the QTc on the ECGs of the 31 infants evaluated on day of life 1-4 (R = 0.08, P = 0.63) or those of the 14 children older than 4 days (R = 0.01, P = 0.95).  Maternal values of HCQ were sustained throughout pregnancy and delivery (Figure 2).  Mean QTc values were nearly identical between those in the highest and lowest quartiles of cord blood HCQ levels (P = 0.57) and between the highest and lowest quartiles of average HCQ levels during pregnancy (P = 0.54) (Figure 3A and 3B).  Among these 45 infants, only 5 had prolongation of the QTc (11%; 95% CI: 4% – 24%), 2 marked and 3 marginal. No arrhythmias occurred in any neonate that was not known to have heart block.

Conclusion: In aggregate, these data provide reassurances that the maternal use of HCQ is not associated with a high incidence of QTc prolongation in the neonate. 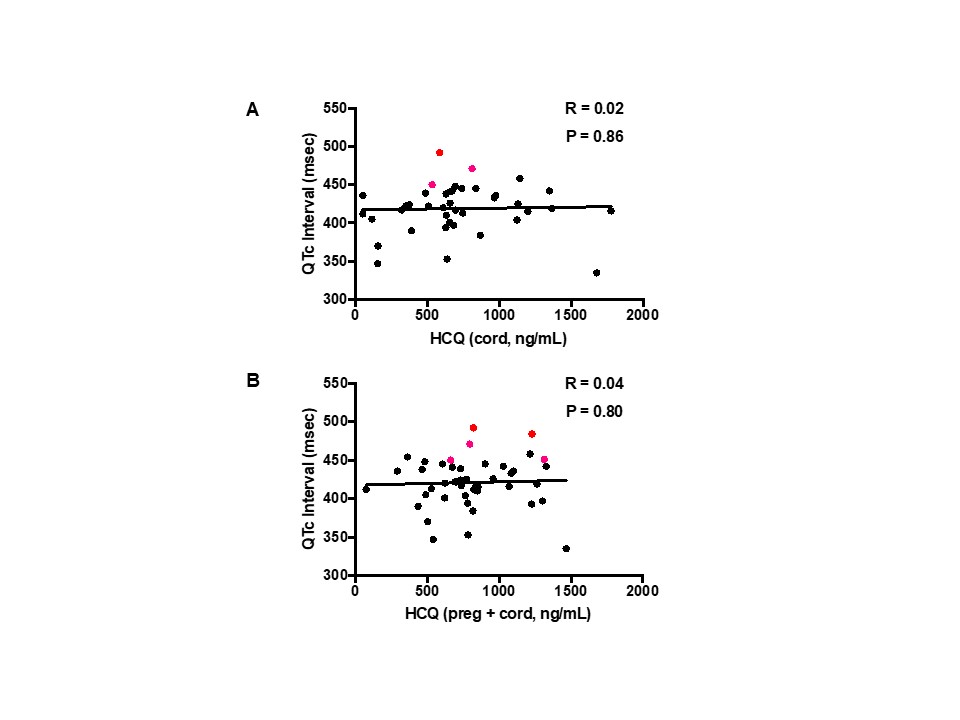