Background/Purpose: Interleukin 23 (IL-23) is involved in the pathogenesis of systemic lupus erythematosus (SLE). IL-23 is elevated in the sera of patients with active SLE compared to those with inactive disease and it induces the expansion of pathogenic IL-17-producing cells which infiltrate inflamed tissues including the kidneys. However, there are still limited data on the role of IL-23 on nonhematopoietic kidney resident cells. We hypothesized that the expression of IL-23 receptor (R) will be increased in the podocytes of patients with active lupus nephritis (LN) and that deficiency of IL-23R only in podocytes of lupus-prone MRL/lpr mice, should ameliorate the pathology associated with LN.

Methods: Kidney biopsies of patients with LN (3 active and 3 in remission) were immunostained for IL-23R. We generated podocyte-specific IL-23R conditionally deficient mice on the lupus-prone MRL/lpr mouse using the Cre-loxP system. Mice harboring loxP sites of IL-23R gene (IL23R flox/flox) were crossed with Cre transgenic mice driven by the human podocin (NPHS2) promoter/enhancer region. Mice were sacrificed at 21 weeks of age. Serum, urine, kidneys and spleens were collected. Kidneys were stained with hematoxylin and eosin, examined microscopically in a blinded manner by using the renal activity index score (scores range from 0 to 16). Levels of double-stranded DNA antibodies were measured by ELISA. Proteinuria was assessed by albumin to creatinine ratio. Frozen kidney sections were fixed in acetone, stained for IL-23R, IgG, and Calcium/calmodulin kinase IV (CaMK4) and analyzed using a confocal microscope. Fluorescence intensities were measured by ImageJ software. T- test was used for statistical analysis and data are expressed as mean±SD.

Conclusion: IL-23R is significantly increased in the kidneys of patients with active LN compared to those with inactive disease. Deficiency of IL-23R specifically in podocytes of the lupus-prone MRL/lpr mouse, although it did not affect the peripheral autoimmunity, it abrogates the development of LN, despite the fact that IgG was deposited in the glomeruli. 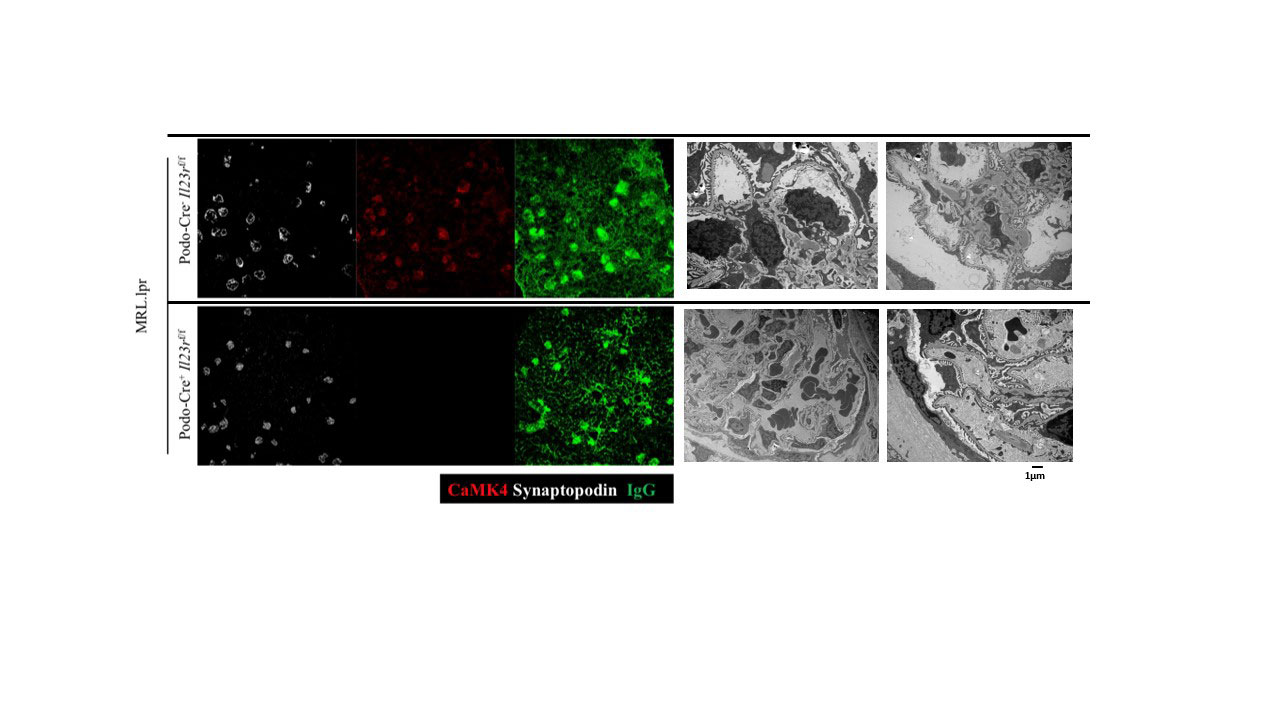