Background/Purpose: Cognitive impairment (CI) is among the earliest and the most prevalent manifestations of SLE. Previous studies have demonstrated that the increased levels of interferon (IFN)-induced gene expression in SLE are positively correlated with SLE disease activity and severity. The aim of this study is to examine the relationship between IFN levels and cognition as measured by the American College of Rheumatology neuropsychological battery (ACR-NB).

Methods: 301 consecutive consenting SLE patients (18 – 65 years old) attending a single center between Aug 2017 and Jan 2019 were enrolled in the study. IFN-induced gene expression was quantified by nanoString on RNA isolated from whole peripheral blood archive in TEMPUS tubes.  The log2 transformed normalized levels of five IFN-induced genes were summed to produce the IFN5 score. Cognition was measured using the ACR-NB (19 tests) representing manual dexterity, processing speed, language, simple attention, memory and executive function domains. Using age and gender stratified normative data, patients were classified on the ACR NB as having CI if a z-score of ≤-1.5 was observed in ≥ 2 domains or z ≤-2.0 in ≥1 domain. Principal Component Analysis (PCA) was used to explore the relationships among cognitive tests, interferon levels and SLE disease duration.

In PCA, the variance-covariance matrix of the cognitive tests was decomposed into a series of eigenvectors with corresponding eigenvalues. Each eigenvalue constitutes the variance of the linear combination of all test scores weighted by values contained in the corresponding eigenvector. This method reduces the dimensionality of the experimental data and to summarize the association between the variables in the data. To preserve the largest portion of the total variance explained by PCA, we only retained the first two components.

Results: Of 301 patients, 89.0% were women,  mean age 40.9 ± 12.1 and mean disease duration 14 ± 10.1 years at study entry. PCA cognitive tests loaded onto 2 dimensions explained 39.6% of the variance in neuropsychological performance. The 1st  dimension (explained 28.3% of the total variance) was correlated mainly with more complex cognitive tests and primarily explained CI status of participants. The second dimension (11.3%) was mainly explained by measures of simple information processing or motor speed.

Fig 1a shows the patients’ component scores coloured by ACR-NB binary definition for CI and non-CI. This 1st dimension splits CI and non-CI patients at baseline. No clustering was observed when participants were categorized based on interferon level (Fig. 1b). No relationship was found between the cognitive tests and IFN levels or disease duration (Fig. 2). A weak negative correlation was also observed between interferon levels and RCFT and hand tapping, though this was not significant (Fig. 2). 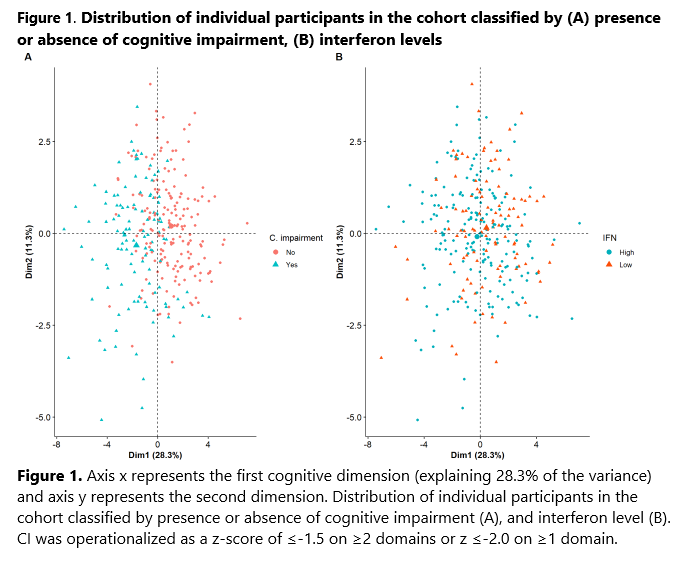