Background/Purpose: There are conflicting data regarding the effect of nonsteroidal anti-inflammatory drugs (NSAID) on radiographic spinal progression in axial spondyloarthritis (axSpA). The analysis of the first 2-year of the GErman SPondyloarthritis Inception Cohort (GESPIC) showed that higher NSAID intake may retard new bone formation in r-axSpA. It remained, however, unclear, whether cyclooxygenase-2 selective inhibitors (COX2i) might have a stronger effect than non-selective (NS) ones and if the effect could be observed also in nr-axSpA. In this study, we aimed to investigate the effect of NSAIDs (COX2i and NS) intake on radiographic spinal progression in patients with r-axSpA and nr-axSpA.

Methods: Based on the availability of at least two sets of spinal radiographs during 10-year follow-up, 243 patients with early axSpA (130 and 113 nr- and r-axSpA, respectively) from GESPIC were included in this analysis. The patients contributed a total of 540 2-year radiographic intervals. Radiographs were scored by 3 trained and calibrated readers according to the modified Stoke Ankylosing Spondylitis Spine Score (mSASSS). Final mSASSS was calculated as a mean of 3 readers, and progression was defined as absolute mSASSS change score over 2 years. NSAID type, daily dose, and frequency of intake were recorded at visits. The ASAS index of NSAID intake (0-100) counting both dose and duration of intake was calculated for intervals. The association between NSAID intake (NSAID type and NSAID score) and radiographic spinal progression over 2 years was analyzed using longitudinal generalized estimated equations (GEE).

Results: At baseline, 161 (66.3%) patients were treated with NSAIDs. While 289 (53.5%) and 128 (23.7%) 2-year radiographic intervals were covered by NS and COX-2i respectively, 123 (22.8%) intervals were not covered by NSAID. A significant association between higher NSAID intake and retardation of radiographic spinal progression was found in adjusted multivariable longitudinal GEE analysis. This effect was mostly attributable to patients with r-axSpA (Table). mSASSS progression was numerically lower in patients taking COX2i (irrespectively of dose) as compared to patients treated with NS-NSAIDs; in stratified analysis, however, there was no clear dose-dependency (as reflected by NSAID index) in both groups (Figure, Table). 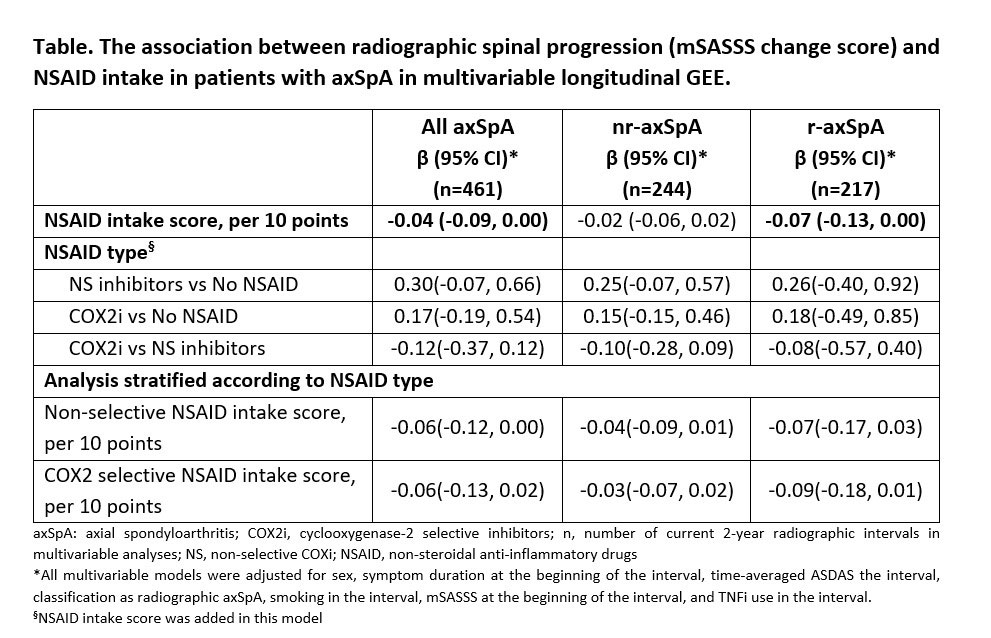