Lupus nephritis (LN) affects up to 60% of SLE patients and is worse in minority communities. Traditionally membranous LN confers a better prognosis than proliferative, but a significant number of patients do develop renal failure. Moreover, mixed membranous and proliferative histology is not uncommon. To determine if co-existing proliferative lesions worsen the prognosis of membranous disease, we studied SLE patients who underwent renal biopsy at a large tertiary center.

We analyzed all biopsies with classes: III±V, IV±V and V from January 1997-December 2011, and confirmed that all patients met ≥4/11 ACR SLE criteria. We collected baseline demographic and laboratory information at the time of biopsy as well as medications given. Our composite endpoint was the development of end stage renal disease (ESRD) requiring dialysis and/or death.

Of the 202 patients included, 81.3% were female and the median age was 30.5y. The predominant race was black (54.5%), followed by Hispanic (37.1%) and 8.4% were another race/ethnicity. There was no significant difference between the groups in age, gender or disease duration.

123 patients had proliferative LN (Class III or IV, P), 55 had membranous LN (Class V, M), and 24 had mixed disease (P+M). Black patients were more likely to have class V (p=0.02). Creatinine was higher in P (p<0.01) but there was no difference between M or P+M (p=0.12). There was no difference in median protein to creatinine ratios, serum albumin, and BP between groups. 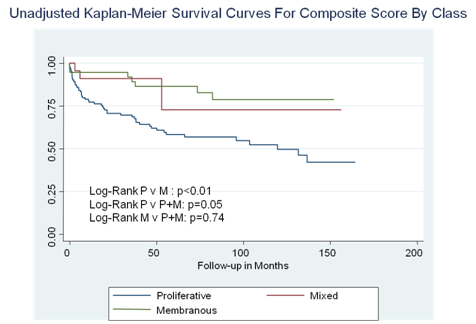 In multivariate models, M as compared to P had improved survival (HR=0.31, p=0.02) but there was no longer a significant difference between P and P+M (p=0.18) As in the univariate analysis, age (p=0.03), protein to creatinine ratio (p=0.03), and creatinine at biopsy (p<0.01) were all associated with a decreased risk of survival.