Background/Purpose: Scleroderma-related interstitial lung disease (SSc-ILD) is a pulmonary fibrosing disorder characterized by systemic inflammation and progressive scarring of the lungs that leads to respiratory failure. Previous studies have shown that mycophenolate mofetil (MMF) can be beneficial in SSc-ILD. The majority of studies characterizing patients with ILD and evaluating survival have been conducted in populations with a Caucasian predominance. The objectives of the current study were to explore the role of MMF in the treatment of SSc-ILD, and examine whether racial differences influence response to treatment, specifically between African Americans (AAs) and Non-African Americans (Non-AAs).

We conducted a retrospective study of patients with SSc-ILD that were seen at our institution since 2008, treated with MMF (target dose 1500 mg bid) and had documented PFTs at least once prior to MMF initiation. PFTs at 6, 12, 18, 24, 36, 48 months after initiation of MMF were also documented. Baseline characteristics as well as PFTs were compared using t-test. A regression analysis was used to compare the trend of FVC% predicted, TLC% predicted and DLCO% predicted before and after MMF treatment, as well as to compare AAs and Non-AAs.

Results: Sixty-eight patients were included of which 38 (55.8%) were AAs. The median age in AAs and Non-AAs was 44 (IQR 13.5) and 46 (IQR 15.1), respectively (Table 1). The AA group had a higher female percentage, slightly but not significantly longer disease duration at first PFTs and no significant difference in anti-nuclear antibodies subtypes compared to Non-AA group. Prior to MMF initiation, the average FVC% predicted was 63.2 (± 1.9) for the entire cohort, with AAs having a statistically significant lower baseline than non-AAs (59.8 ± 2.3 vs. 67.7 ± 2.7, p=0.02). The trend change in FVC% predicted pre- and post- treatment was significant in both groups (+3.8 (SE 1.0), p=0.0002 in AAs and +5.2 (SE 1.1), p < .0001 in non-AAs) with significant stabilization of FVC% predicted after initiation of MMF (Figure 1). The difference in the trend change between the AA and non-AA group was not statistically significant. There was no significant trend change in TLC% predicted and DLCO% predicted, although the AA group showed an insignificant decrease in both values post- MMF compared to non-AA that showed an increase (p >0.05).

Conclusion: MMF can significantly slow the decrease in FVC% predicted in patients with SSc-ILD in both AAs and non-AAs. The main difference in our population was the significantly lower FVC in our AA patients at the start of MMF. It is critical to identify patients with ILD as early as possible to initiate treatment and prevent further deterioration. This is particularly true in AAs. 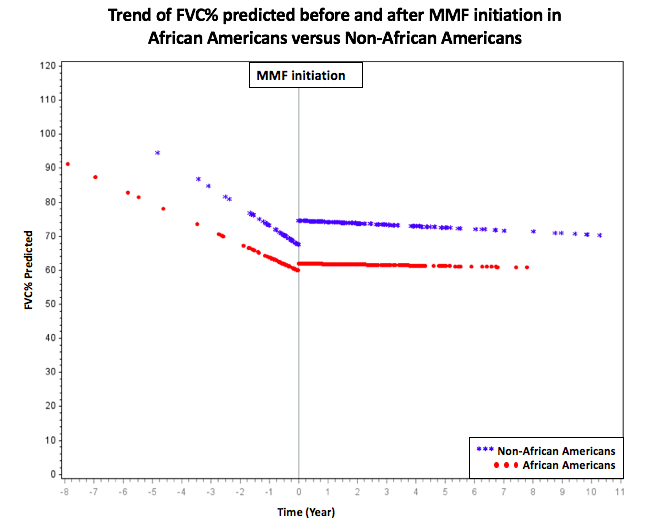