Background/Purpose: Raynaud’s Phenomenon (RP) leading to repetitive ischaemia and reperfusion (IR) stress, is the first recognisable sign of systemic sclerosis (SSc). Although RP has been linked to SSc aetiology, direct observations substantiating this are scarce. High-mobility group box-1 (HMGB1) is a nuclear factor released by necrotic cells, of which serum levels may rise quickly after IR injury in other diseases. IR injury promotes interferon (IFN) inducible genes, which have been implicated in SSc pathophysiology. Since HMGB1 can signal through the receptor for advanced glycation endproducts (RAGE), we investigated whether an RP attack promotes release of HMGB1, leading to fibroblast activation and upregulation of IFN- inducible genes in a translational study.

Results: During cold challenge, finger perfusion was reduced in SSc and recovered slower than in primary RP and healthy controls (fig. 1a). HMGB1 increased significantly 30 min after cold challenge in SSc compared to healthy controls, but not to primary RP (fig. 1b). IP-10 remained stable. In vitro stimulation of fibroblasts with HMGB1 resulted in 20-fold increase in mRNA expression of IP-10, while IL-6 increased 3-fold. Col1, α-SMA, IFI144L, Mx1, and LY6E did not change (fig 2a). IP-10 expression was inhibited by 50% by preincubation with FPS-ZM1 (fig 2b). TGF-β1 stimulation promoted IL-6 and CTGF, without effects on IFN gene expression. HMGB1 stimulation induced myofibroblast differentiation and formation of α-SMA fibers. Both HMGB1 and IP-10 were significantly higher in patients with SSc compared to healthy controls (fig 3).

Conclusion: In this translational study, we show for the first time that an RP attack in patients with SSc leads to release of HMGB1. In vitro, HMGB1 induces IFN regulated gene expression in fibroblasts, especially interferon-γ inducible IP-10, at least in part in a RAGE dependent manner. This potentially links HMGB1 release following an RP attack to IFN inducible proteins as putative sequential steps leading to disease progression in SSc. 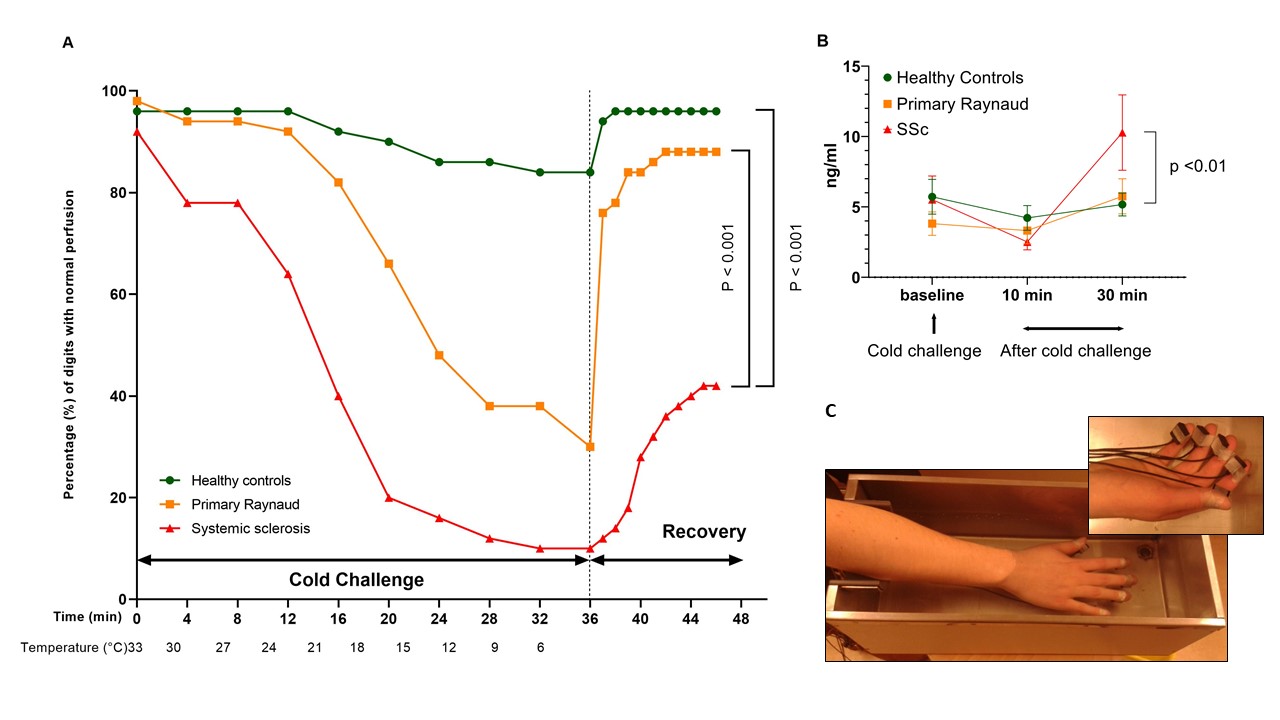 Figure 1: Cold challenge in patients with SSc, primary RP and healthy controls showing effects on fingers perfusion (fig. 1a). The hand is gradually cooled from 33 to 6 degrees Celsius within 36 minutes, and rewarmed at ambient temperature (22 degrees Celsius) to assesses recovery of perfusion. In fig. 1b the effect of the cold challenge is shown on levels of HMGB1. Fig. 1c shows that hand is submerged in water to perform the cold challenge, and digital perfusion is measured by photoplethysmography.

Figure 3: Serum levels of HMGB1 (fig. 3a) and IP_10 (fig. 3b) in patients with SSc compared with age and sex matched healthy controls.