Background/Purpose: Although management of RA has improved greatly over the past two decades with the advent of novel therapeutics, racial/ethnic and socioeconomic disparities persist. Traditional RA disease activity measures, including the Clinical Disease Activity Index (CDAI) and DAS28-ESR, are influenced by provider and patient subjectivity which may impact racial/ethnic differences observed in prior studies. A multiple-biochemical measure of disease activity (MBDA) score, a composite of 12 serum biomarkers, was designed to be a more objective measure of RA disease activity. This study examined racial and ethnic differences in MBDA scores within a diverse cohort of RA patients.

Methods: Data are derived from the University of California, San Francisco RA Cohort, a longitudinal observational cohort, in which disease activity was measured as part of routine clinical care and MBDA was obtained at the time of each clinical encounter. All participants were from a safety-net hospital thereby reducing variations in income and insurance. Participants with ≥1 MBDA measure and self-reported race/ethnicity were included. Multivariable linear regression evaluated the association between race/ethnicity groups and mean MBDA score, adjusting for age at enrollment, sex, smoking history, RA symptom duration at enrollment, number of study visits, ACPA status, mean BMI, mean conventional DMARD (cDMARD) use, mean biologic DMARD (bDMARD) use and mean prednisone use. Missing data elements were estimated using multiple imputation with chained equations (MICE). Sensitivity analyses substituted CDAI and DAS28-ESR for the MBDA in multivariable linear regression models.

Conclusion: In a diverse observational RA cohort, Hispanic participants had the highest mean MBDA score, which was significantly higher than that of White participants after adjustment in the multivariable model. Black and Asian participants also had higher disease activity scores than White participants, although these differences did not reach statistical significance. Regardless of the method of assessment, racial/ethnic differences in disease activity are observed in RA. MBDA scores appear to add no additional information beyond standard, ACR-endorsed measures of disease activity in this analysis. Further studies focusing on early access to care, mitigating language barriers and addressing racial disparities should be done to enable improvement of disease outcomes across minority racial/ethnic groups. 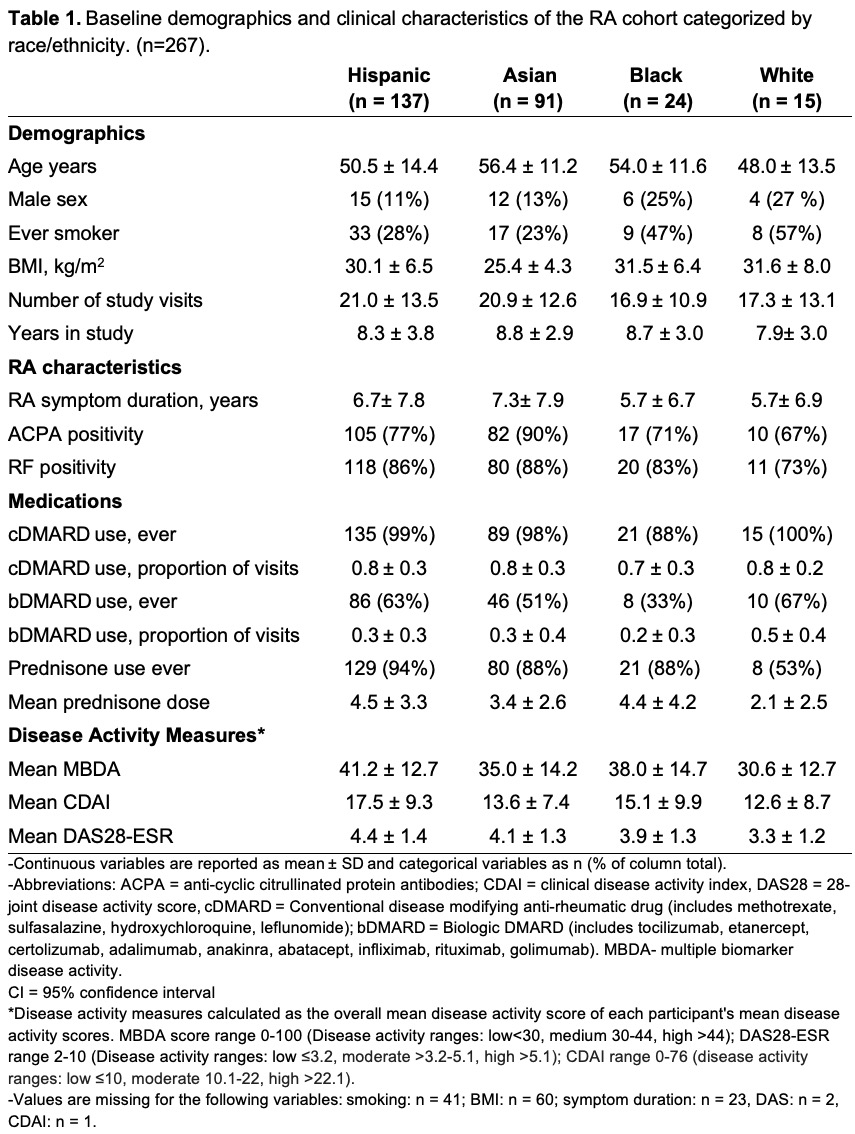