Background/Purpose:   Severe joint pain (SJP) from arthritis may reflect insufficiently managed pain, and SJP can limit an individual’s ability to perform basic functions. We determined the prevalence of SJP among adults with doctor-diagnosed arthritis, overall and by various sociodemographic and health characteristics in 2014, and examined whether the absolute number and age-standardized prevalence of SJP changed for the years 2002, 2003, 2006, 2009, and 2014.

Methods: We used data from the National Health Interview Survey, an annual, nationally representative, in-person interview survey of health status and behaviors of the noninstitutionalized civilian U.S. population. Unweighted sample sizes and final response rates were 31,044 (74.3%) in 2002; 30,852 (74.2%) in 2003; 24,275 (70.8%) in 2006; 27,731 (65.4%) in 2009; and 36,697 (58.9%) in 2014. Adults were defined as having doctor-diagnosed arthritis if they answered "yes" to "Have you ever been told by a doctor or other health professional that you have some form of arthritis, rheumatoid arthritis, gout, lupus, or fibromyalgia?" Respondents assessed their joint pain on a scale of 0 to 10 in the past 30 days, “where 0 is no pain or aching and 10 is pain and aching as bad as it can be.” Severe joint pain was defined as a 7 to 10.  Prevalence estimates were age-standardized to the projected U.S. 2000 population (the US public health standard): differences were statistically significant if 95% confidence intervals (CIs) did not overlap.

Conclusion:   The prevalence of SJP in the past 30 days remained high (range: 35.3-37.5%) and stable from 2002-2014, but absolute numbers continue to grow and in 2014, was almost 15 million.  This is likely due to the aging of the population. Increased dissemination of evidence-based physical activity interventions shown to reduce joint pain in adults with arthritis is needed.  National efforts to improve generic pain management (e.g., the 2016 National Pain Strategy) may also help. 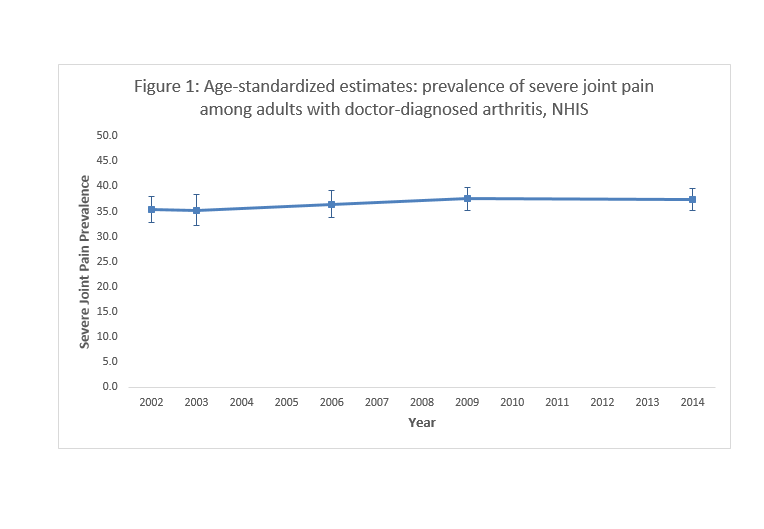