Background/Purpose: Women with active Rheumatoid Arthritis (RA) are more prone to relapses and complications during pregnancy. The potential risks of disease activation and treatment during gestation have to be weighed in a shared decision prior to conception. An increasing number of women who wish to conceive are being treated with TNF inhibitors (TNFi). Some want to discontinue or at least reduce therapy during pregnancy and require information on opportunities and risks. Therefore, we sought to explore the outcome of pregnancies in women with RA who either discontinued, reduced or maintained TNFi treatment after conception.

Methods: Pregnancies of women from an outpatient pregnancy clinic were evaluated before conception, during each trimester and postpartum. Clinical characteristics, disease activity (DAS28-CRP), medication use and pregnancy outcome were analysed. A flare was defined as increase in DAS28 > 1.2 or an increase in DAS28 > 0.6 and DAS28 ≥ 3.2. All women received extensive counselling before pregnancy based on current knowledge and subsequently decided to continue or stop TNFi at conception. If they stayed on TNFi and were in remission, women received the suggestion to stretch the therapy intervals in a disease activity guided manner.

We applied a multivariate logistic regression model to assess the association between the use of TNFi throughout pregnancy and the occurrence of flares during pregnancy. Adjustment for potential confounders (age, disease duration, DAS28 at conception, sero-positivity, HAQ, previous therapy with methotrexate, previous joint surgery) was performed using logistic regression.

Results: After exclusion of two miscarriages, 70 completed pregnancies were enrolled and grouped according to their decision to stop (group 1) or continue (group 2) TNFi therapy during pregnancy. The latter were subdivided into those who could stretch the therapy intervals (group 2a) and those who could not (group 2b). A significantly lower flare rate during pregnancy was observed in women who continued their TNFi, whether they could or could not stretch application intervals (OR 0.06 and 0.12, respectively). Postpartum, again both groups with continued TNFi showed a lower flare rate, but significance was only reached in those who were able to reduce TNFi with an OR of 0.27. In addition, a higher dose of oral prednisolone was reported in group 1 (Table 1).

Conclusion: Women with RA who discontinue TNFi at conception face a higher risk of flares during pregnancy and often have an increased demand for steroids to control disease activity. When in remission under ongoing TNFi therapy during pregnancy, it seems possible and safe for women to reduce the frequency of injections in a disease activity guided manner. These real-world data will help to provide women with comprehensive advice on treatment options and risks regarding TNFi therapy at pregnancy counselling. 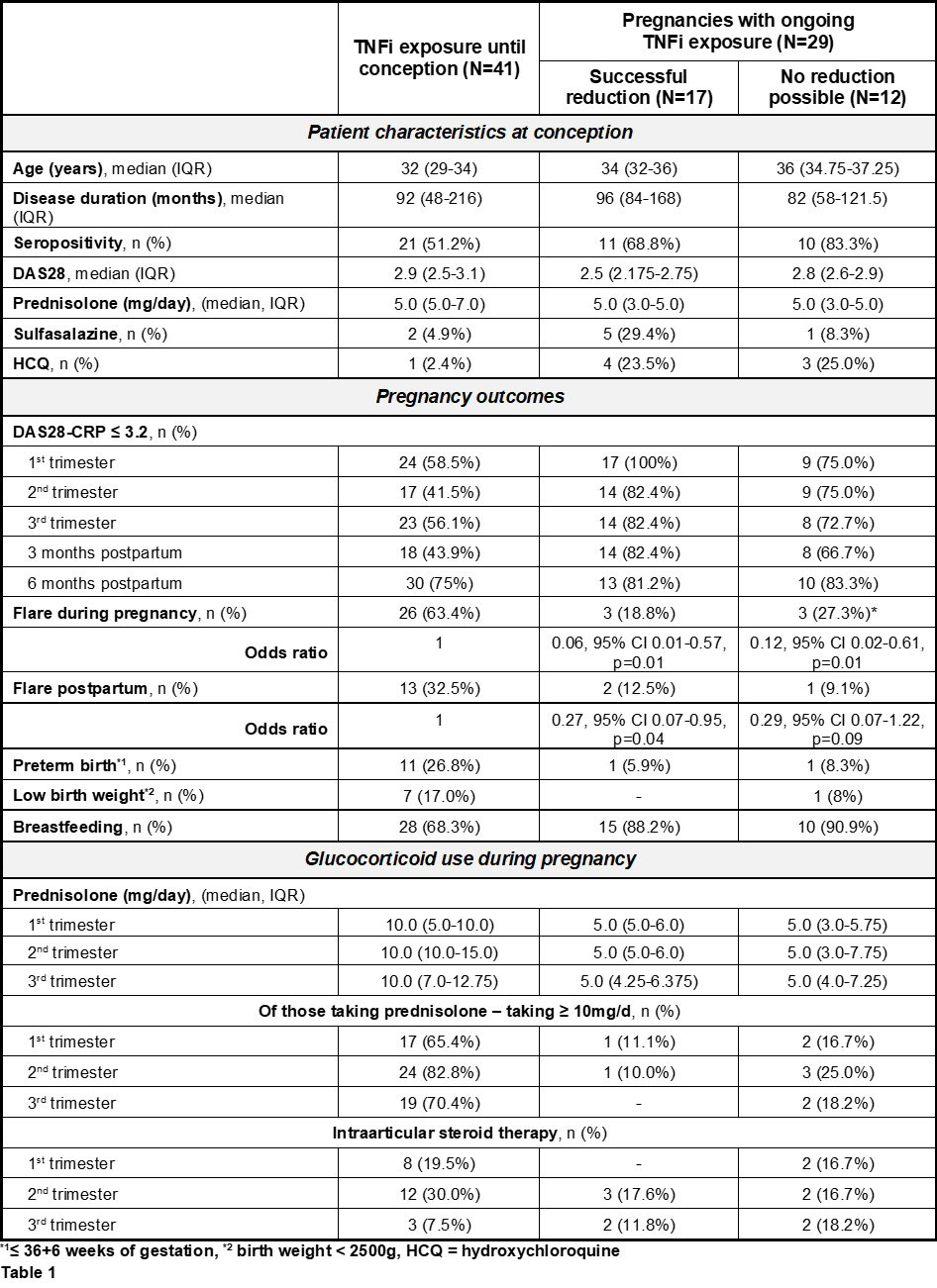 Disclosure: I. Haase, None; S. Spaethling-Mestekemper, None; R. Brinks, None; M. Schneider, None; R. Fischer-Betz, None.