Background/Purpose: There is a need for clinically useful measures of cardiovascular (CV) risk in pediatric-onset SLE (pSLE). Nocturnal blood pressure (BP) non-dipping (loss of the physiologic nocturnal decline in BP) is a reversible marker of CV risk and potential treatment target that can be reproducibly measured by ambulatory blood pressure monitoring (ABPM). We assessed the frequency of non-dipping BP in pSLE and evaluated its association with vascular and cardiac function.

Results: The majority of subjects had inactive disease at the time of assessment (median SLEDAI 2 [interquartile range 0-2]), with a mean disease duration of 2.9 years (±2.1). 18/20 ABPM studies were evaluable. Agreement between hypertension category by manual office BP and 24-hour ambulatory mean SBP/DBP was poor (kappa 0.08). The prevalence of non-dipping and nocturnal hypertension was 50% and 11%, respectively, which occurred even in the absence of white coat or masked hypertension (Table 1). Compared to subjects with normal dipping, non-dippers were more often from low-income households and still using glucocorticoids. They also tended to have higher body mass index and time-averaged cumulative disease activity (Table 2). Reduced SBP/DBP dipping correlated with poorer endothelial function, decreased myocardial shortening (less negative strain) and increased LV stiffness (prolonged isovolumetric relaxation) (Table 3). In contrast, higher BP load was strongly correlated with increased arterial stiffness and central BP, but not with endothelial or cardiac function.

Conclusion: In a racially diverse group of children and adolescents with pSLE with low disease activity, there is a high prevalence of nocturnal BP non-dipping even in the absence of systemic hypertension. BP load relates to arterial stiffness, whereas nocturnal BP dipping relates to subclinical LV strain and endothelial function, and therefore ABPM abnormalities may represent two distinct mechanisms of early CV disease in pSLE. There is a potential role for routine ABPM in cardiovascular risk stratification of youth with pSLE.

This research was supported by the Lupus Foundation of America, Inc. 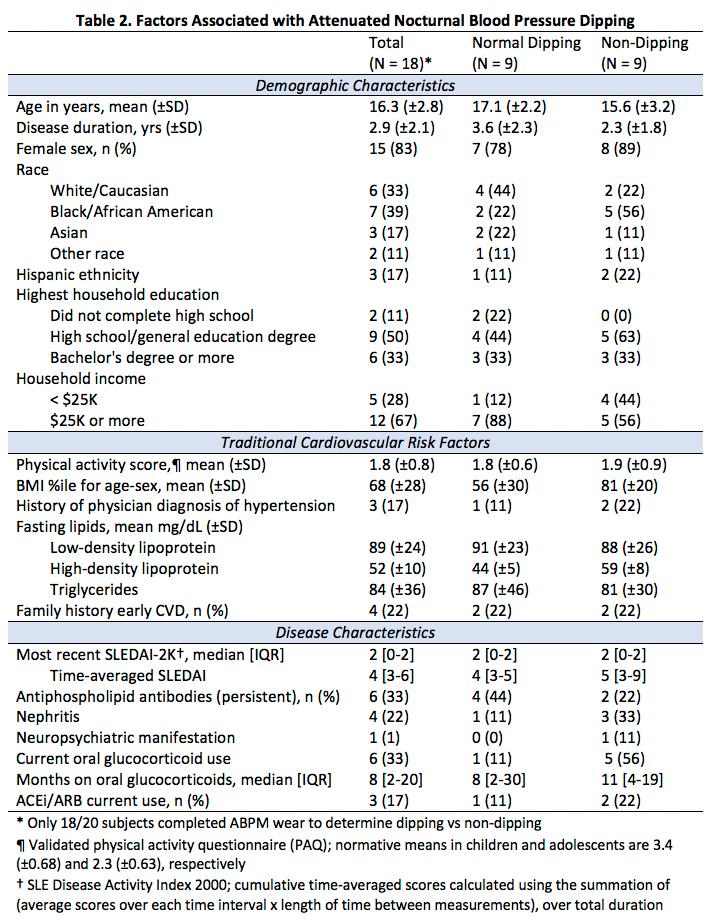 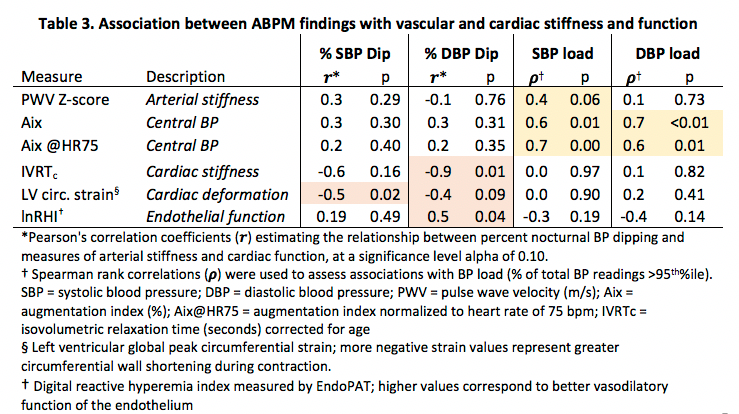