Background/Purpose: Krebs von den Lungen-6 (KL-6), a marker of lung epithelial and endothelial injury, has been associated with progression of interstitial lung disease associated with systemic sclerosis (SSc-ILD). In the SENSCIS trial, nintedanib, an intracellular inhibitor of tyrosine kinases, slowed the rate of decline in forced vital capacity (FVC) in patients with SSc-ILD compared with placebo. We assessed the associations between levels of KL-6 and clinical variables, and the effect of nintedanib on changes in KL-6 in the SENSCIS trial.

Methods: Patients in the SENSCIS trial had SSc with first non-Raynaud symptom ≤7 years before screening and an extent of fibrotic ILD on HRCT ≥10%. Blood samples for biomarker analysis were taken at baseline and at weeks 4, 24 and 52. Absolute changes from baseline in KL-6 over 52 weeks were analyzed using a mixed model for repeated measures and restricted maximum likelihood approach. Data were log10 transformed prior to analysis and estimates of change from baseline were back-transformed to provide fold changes. Associations between KL-6 levels and age, FVC, DLco, SpO2, modified Rodnan skin score, St George’s Respiratory Questionnaire total score, and digital ulcer net burden at baseline, and between changes from baseline in KL-6 and each clinical variable over 52 weeks, were assessed using Spearman’s correlation coefficients (rho). Correlations with a coefficient ≥0.25 and a p-value < 0.05 were considered notable. 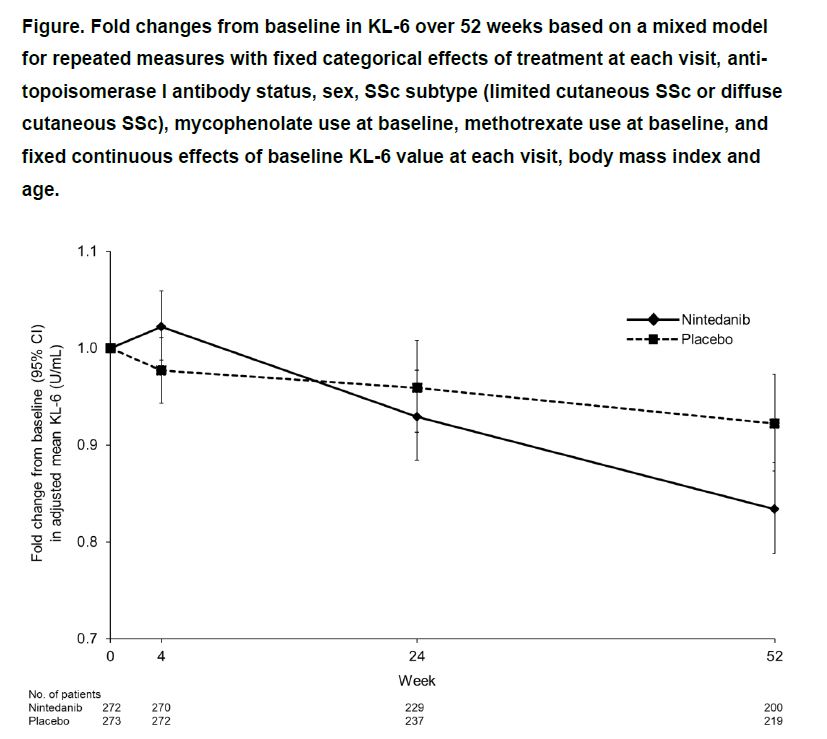