Background/Purpose: Diagnosis of axial spondyloarthritis (SpA) is nowadays commonly made with pelvic radiography or MRI. However, there is an important inter-observer variability for radiographs, and MRI is subject to possible false positives and is not the best modality for studying structural lesions. Conversely, pelvic CT has an excellent specificity and appears to be more effective than radiography for the diagnosis of SpA. However, CT findings in patients over 50 years of age have not been studied. Therefore, we conducted a study to describe sacroiliac (SI) joint CT characteristics in patients with ankylosing spondylitis (AS), aged 50 years or older.

Methods: An observational, retrospective study was performed using medical records from Besançon University Hospital’s rheumatology department, which were screened to identify patients with AS, according to the 2009 ASAS criteria. A search was then carried out for patients over 50 years old in the hospital’s imaging archiving system to identify those who had undergone a CT which included the SI joints in their entirety. Non-inclusion criteria were the existence of pelvic bone lesions and a history of pelvic radiotherapy. Each patient was then matched with a control of the same age and sex, recruited through the hospital’s imaging archiving system.

For each individual, CT was interpreted by two independent readers using a score previously used by Diekhoff et al.1, dividing each SI joint into 12 regions, for each of which joint space narrowing (JSN), erosions, and sclerosis are assessed. For this study, we also observed the existence of intra-articular gas and diffuse idiopathic skeletal hyperostosis (DISH) lesions for each region. Quantitative variables are expressed as mean ± standard deviation and were compared using Student’s t-test. Qualitative variables are expressed as numbers and percentages and were compared using the Chi-2 test.

Bilateral ankylosis was associated with longer disease duration (p=0.0007) and presence of bamboo spine (p=0.0003). The distribution of patients’ lesions appeared to be homogenous over all 24 regions studied (Figure 1).

Conclusion: CT findings in AS patients over 50 years of age are mostly represented by changes in joint space, with bilateral ankylosis present in half of the patients, and show more erosions and JSN changes, but less intra-articular gas than controls. AS appears to be a protective factor for DISH. 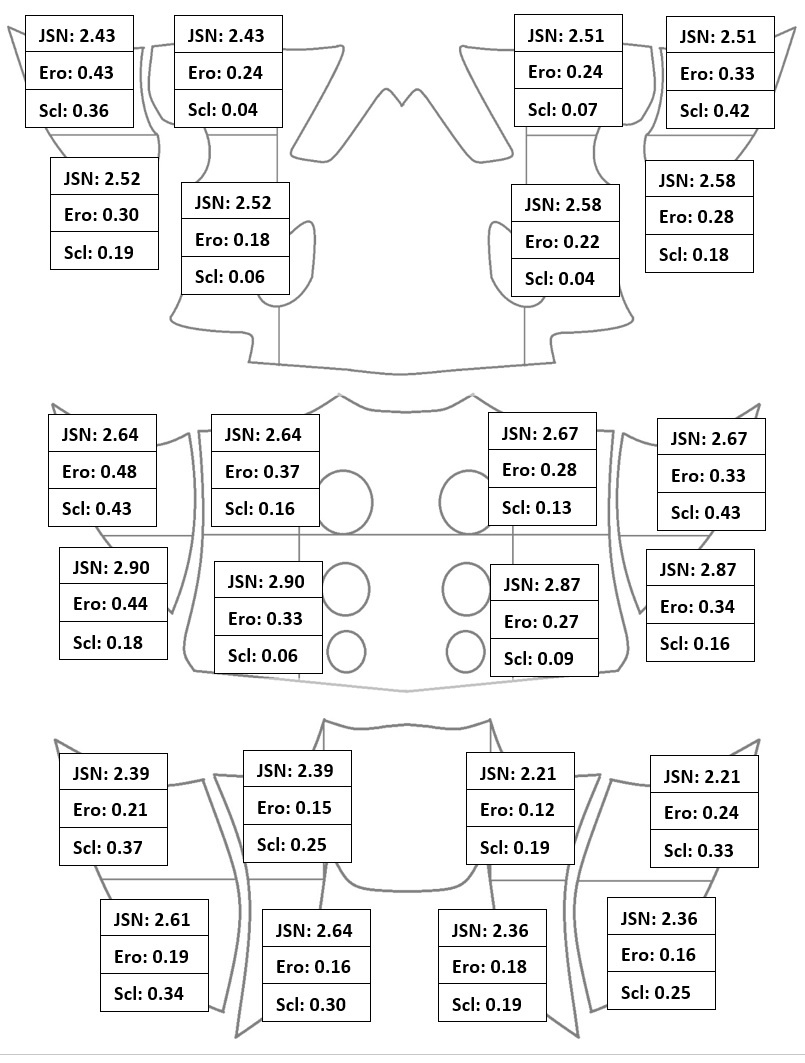