Vascular involvement has a major impact on  the pathogenesis   of Systemic sclerosis (SSc) and there is evidence that microvascular damage with endothelial cell activation  may direct  the phenotypic presentation of the disease. Endothelial Vinculin has a crucial regulatory role  during angiogenesis(1). Villano et al., showed that expression of vinculin was significantly higher in endothelial cells challenged with the sera of SSc pts  than  endothelial cells treated with sera from healthy controls(2). Hence, the dysregulated vinculin expression may add to defective angiogenic processes already  present  in SSc. We hypothesize that over- expression of Vinculin in SSc may trigger anti-vinculin antibodies (abs) which may contribute to vasculopathic features in SSc. Objective: To measure the levels of anti-Vinculin antibodies in serum of scleroderma patients, in comparison to Healthy controls and to correlate their levels with SSc related outcome measures. Methods: Serum samples from 72 SSc patients meeting the ACR/EULAR 2013  SSc criteria and 50 healthy controls  were recruited. Serum levels of anti-vinculin antibodies were determined by ELISA. Clinical data were obtained from charts for statistical correlations.

We report for the first time, higher levels  of anti-vinculin antibodies( a potential  marker of vascular involvement) in SSc patients than controls and a trend to correlation with PAH.  Further research is warranted on more SSc patients to evaluate the role of anti-vinculin antibodies as markers of vascular involvement(i.e., PAH) and to  identify  their role in the pathogenesis of SSc /SSc-PAH. 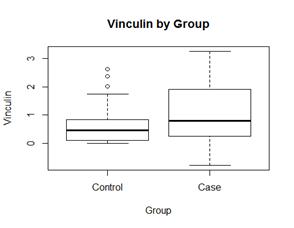 Figure 1: showing the Levels of antivinculin antibodies in SSc and healthy controls.