Background/Purpose:  Indigenous North American populations have high prevalence of seropositive RA.  The Cree/Ojibway population in Central Canada and the Alaska Native population have a high prevalence of SE alleles, specifically DRB1*0404 and *1402.  Presence of the SE with the non-SE allele*0901, is associated with early RA onset and the presence of ACPA in unaffected relatives of RA patients.  We examined the association of SE copy number as well as specific SE alleles with the depth and breadth and fine specificity of ACPA response.

Methods: RA patient subjects were classified as containing no copies of the SE (n=58), a single copy of the SE (SE/X, n=116), or two copies of the SE (SE/SE, n=58).  We similarly stratified subjects with two copies as homozygous (n=36) or heterozygous (n=22).  Using a multiplex ACPA antigen array, we evaluated the depth of the ACPA response using an ACPA score (sum of all normalized ACPA titers divided by number of epitopes) and the breadth of the ACPA response by defining the total number of ACPA positive.  We used significance analysis of microarrays to compare ACPA subtypes between different SE alleles.

Results: Those with one copy of the shared epitope had more ACPA than those with no copies of the SE and those with two copies displayed more ACPA than those with one copy.  Among those with two copies of the SE, the highest levels were observed among subjects heterozygous for two different SE alleles compared to those with no copies of the SE (P<0.01) and a trend toward higher levels in those with a single SE allele or homozogous for two copies of the same SE allele.  Analysis of the predominant SE alleles within this population revealed a gradient of ACPA associations with *1402 positive patients demonstrating increased ACPA compared with all non-1402 patients and more than the *0404 population.  ACPA specificities increased among the 1402 patients included several citrullinated fibrinogen epitopes and citrullinated enolase.  Subjects with the*0901 allele alone (X/0901) demonstrated no increase in ACPA and no additional contribution 0901 was noted in heterozygotes expressing a single copy of the SE and *0901.

Conclusion:   We observed a stepwise increase in depth and breadth of the ACPA response with increasing dose of SE, an effect primarily seen among those heterozygous for two different SE alleles.  These observations support reports suggesting that a heterozygous SE allele combination is associated with RA severity. Moreover, the prominence of the *1402 SE allele as a strong risk factor for an expanded ACPA response is intriguing considering the proposed protective effect of serine residues present in positions 11 and 13 of this allele. Exploration of the peptide binding capacity of this MHC molecule will be important in understanding how it may shape the ACPA response. 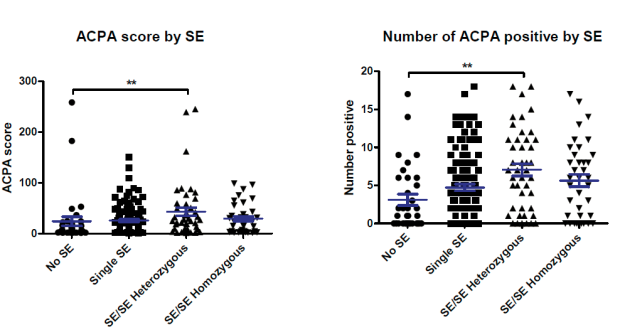