Background/Purpose: Veterans have increased predilection for multiple health conditions. We undertook this study to investigate the possible association of participation in active military duty in veterans with osteoarthritis.

Since the year 2000, the United States has been involved in two major military conflicts in Afghanistan and Iraq (Operation Enduring Freedom and Operation Iraqi Freedom). The number of troops that have taken part in these interventions is around 2.5 million. There has also been an increase in deployment for female veterans since 2000, with women comprising of over eleven percent of troops deployed. Veterans have a higher predisposition for several health conditions including arthritis. There are however limited data regarding active military duty and its effects on the risk for developing arthritis.

Methods: We analyzed Center for Disease Control and Prevention (CDC) Behavioral Risk Factor Surveillance System (BRFSS) survey data for the years 2000 and 2015 to understand the changes in arthritis prevalence in the veteran population following the two major military conflicts. We compared the prevalence odds ratio for arthritis in the year 2000 versus 2015 amongst male and female veterans as compared to the general population in United States. The data was stratified by sex (Male and Female) and age (18-29, 30-49, 50-69 and over 70) and a weighted analysis was done using Statistical Analysis System (SAS) software. 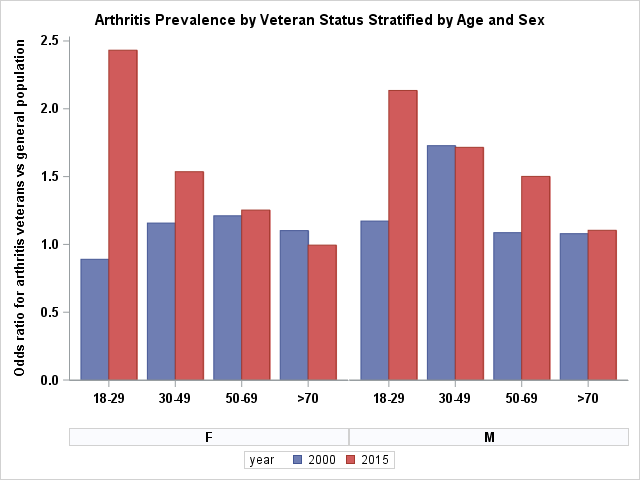 Conclusion: The prevalence odds ratio for male and female veterans in age 18-29 years have increased significantly from 2000 to 2015 following the two major military interventions.