Background/Purpose: There is a paucity of information
about the incidence and prevalence of systemic lupus erythematosus (SLE) in
United Arab Emirates (UAE) and Arab countries. The aim of this study was to
determine the incidence of SLE and point prevalence among native population of
Al Ain city, UAE.

Methods: Al-Ain city
population are provided with health services in 2 major hospitals and multiple
primary health care clinics all belong to a governmental Abu Dhabi Health
Services (SEHA) and are linked with one Health Information System (HIS). New
cases of SLE (2009-2012) were identified using hospital records and a serology
database as follows: 1) the two major hospitals inpatients and outpatients
medical records (2009-2012) were searched for patients with ICD-9 codes related
to diagnosis of SLE , and discoid lupus ; 2) electronic records for patients
with a positive DsDNA test (ELISA, cutoff value of 50
U/ml) , or two positive ANA test (one hospital provide all the immunological
testing for the city); 3) we searched the skin and renal biopsy records for
diagnosis of SLE, discoid lupus or lupus nephritis. The electronic charts of
these cases identified were reviewed for fulfilling the American College of
Rheumatology (ACR) criteria for SLE. Incidence and prevalence were calculated
based on the yearly census of Al Ain city (Statistics
Center- Abu Dhabi). The standardized age incidence ratio was estimated using
WHO standard population as a reference.

Results: Sixteen new cases (13 females and 3 males)
fulfilled the ACR SLE criteria and were diagnosed between January 2009 and
December 2012. The point prevalence of SLE among native population in Al Ain city according to 2012 population was 23.7/100,000. The
incidence ratio for each year is shown in (Table 1). The mean age at time of
diagnosis was 28.6 ± 12.4 years (range of 4 to 47). Age-standardized incidence
per 100,000 population is shown in Figure 1. Most
common manifestations during the first year of diagnosis were positive ANA and
positive immunological tests (anti-DsDNA, anti-Smith,
anti-cardiolipin or lupus anticoagulant) which were
present in all patients (100%) followed by arthritis (62.5%) and malar rash
(56%).

Conclusion: This is the first population-based
incidence and prevalence report of SLE in UAE. Although the prevalence of SLE
is higher than reported from a similar Arab population from Saudi Arabia, it is
similar to Caucasian populations. 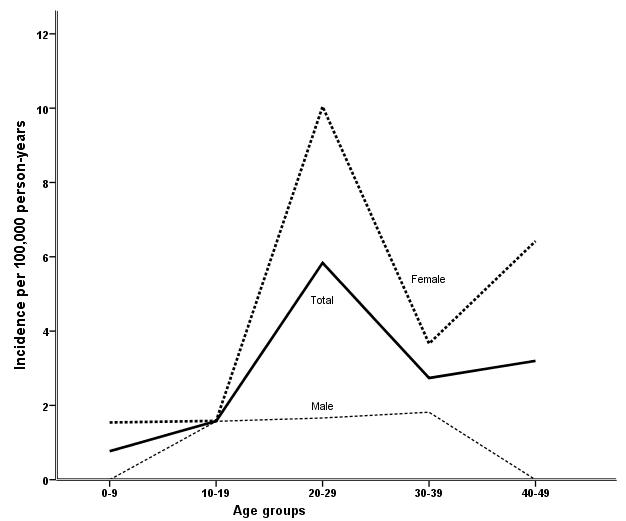 Fig. 1, The age-standardized
incidence per 100,000 population over 4 years among males, females and overall.