Background/Purpose: Rheumatoid arthritis (RA) has been reported to improve during 50-60% of pregnancies. In this study, we evaluated RA disease activity during pregnancy and pregnancy outcomes in a longitudinal registry. <>  <>

Methods: We identified women enrolled in a single-center, prospective RA registry at a large academic medical center, 2003-2015, who reported being pregnant on a semi-annual registry questionnaire. We performed a detailed electronic medical record review to identify occurrence of RA flares during each of three trimesters and up to three months post-partum, based on clinical documentation by the treating rheumatologist. Medication use was recorded during each trimester, and medication changes at the time of flare were recorded. The medical record was also reviewed for use of assistive reproductive technology (ART, including in vitro fertilization and ovulation stimulation), pregnancy outcomes, infant outcomes, and maternal complications. Pregnancy outcomes were categorized as live birth, elective termination, miscarriage (<12 weeks or 12-20 weeks gestation), or stillbirth (≥20 weeks gestation). <>  <>

Results: 45 pregnancies occurred among 34 women with mean age 33.6 (SD 4.7) and mean RA disease duration 7.3 (SD 4.9) years at conception. 88.9% were White and 69.9% were seropositive (RF and/or anti-CCP). 39 (86.7%) pregnancies resulted in a live birth. Flares occurred in 26.7% of pregnancies; these were equally distributed among trimesters (Figure). Post-partum flare was documented after 56.4% of pregnancies that resulted in a live birth. Six (13.3%) pregnancies were the result of ART. There was one tubal pregnancy requiring elective termination. Five (11.1%) pregnancies resulted in miscarriage, all of which occurred at <12 weeks gestation; no stillbirths were documented. Among live births, one pair of twins required intensive care; no other adverse outcomes were documented. Maternal complications included gestational diabetes in two women, pre-eclampsia in one woman, and hemolysis with low platelets and elevated liver enzymes in one woman. <>  <>

Conclusion: The majority of patients did not flare during pregnancy, but most flared within three months post-partum. The majority of pregnancy outcomes were favorable in this prospective RA registry at an academic medical center. 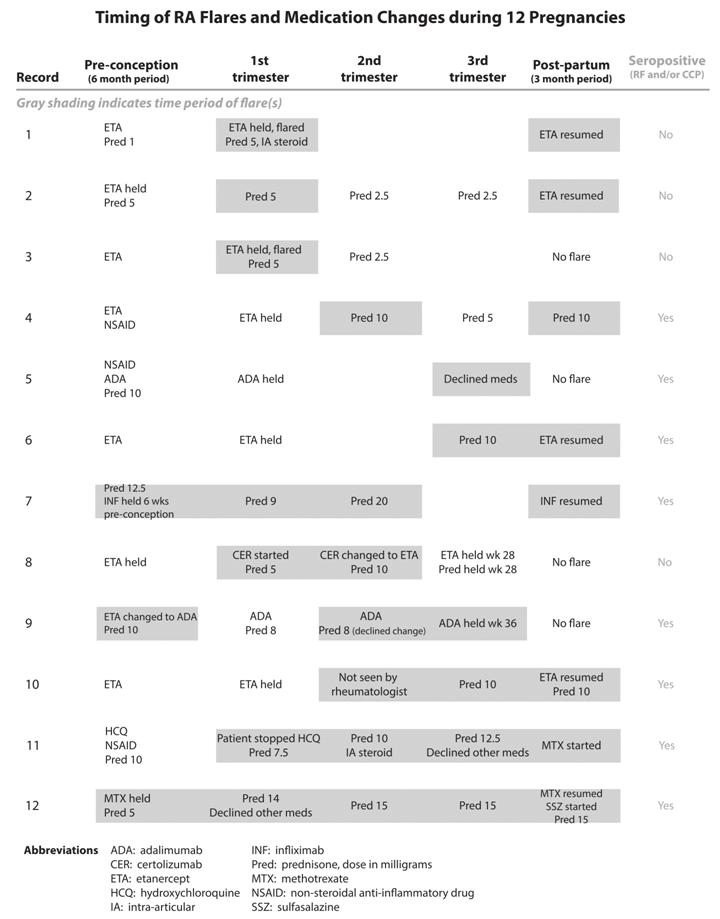