There is an unmet need for effective therapies for patients (pts) with non-infectious intermediate, posterior, or panuveitis who are at risk for long-term side effects from chronic corticosteroid use. The therapeutic goal in uveitis is to achieve quiescence and adalimumab (ADA) has been shown to lower uveitic flare or vision loss in pts with active (VISUAL I) and inactive (VISUAL II) uveitis1,2. As 40-50% of uveitis pts have accompanying extra-ocular rheumatic associations such as Behcet’s disease, sarcoidosis, understanding ocular quiescence will not only aid ophthalmologists but also rheumatologists in the overall management of the pt3. The objective of this study is to assess the control of inflammation over time in pts treated with ADA in the VISUAL I and II trials.

Adults with non-infectious intermediate, posterior, or panuveitis were enrolled in 2 global phase 3, double-masked trials: VISUAL I (pts with active uveitis despite ≥2 weeks [wk] of prednisone [PS] 10–60 mg/d) and VISUAL II (pts with inactive disease dependent on 10–35 mg/d of PS to maintain inactivity). Pts were randomized 1:1 to receive placebo (PBO) or ADA (80 mg wk0, followed by 40mg every other wk from wk1 up to 80wks). In VISUAL I, all pts received a PS burst followed by taper to 0mg by wk15. In VISUAL II, PS taper to 0mg was mandatory by wk19. Quiescence as a pre-specified endpoint was defined as no new active inflammatory lesions and anterior chamber cell grade and vitreous haze grade ≤0.5+. Steroid free quiescence at each visit was additionally reported from wks16-52 for VISUAL I and from wk20- 52 for VISUAL II. Non-responder imputation was used for missing data. Statistical comparison between PBO and ADA was based on Chi-square test. Adverse events (AEs) were monitored.

Pts with non-infectious, intermediate, posterior, or panuveitis achieved significantly higher rates of quiescence and steroid-free quiescence with ADA treatment than PBO in the VISUAL I and II trials. The safety profile of ADA was consistent with the known safety profile across the approved ADA indications. References: 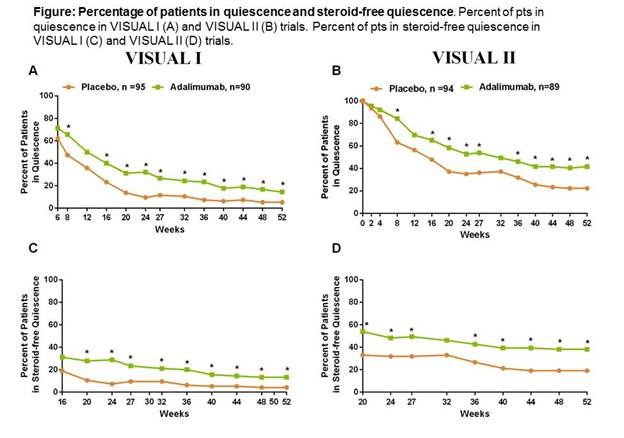