Background/Purpose: TNF-alpha inhibiting therapies (TNFi) are a cornerstone of treatment for inflammatory conditions such as IBD, JIA, and chronic noninfectious osteomyelitis (CNO) but have been increasingly implicated in the development of psoriasis. The objective of this study was to compare the rate of psoriasis in children with IBD, JIA, and CNO with TNFi exposure to those without TNFi exposure and to the general pediatric population.

Methods: This was a single-center retrospective cohort study of electronic health record data from 2008 to 2018. Inclusion criteria were at least 2 ICD-9 or ICD-10 codes for JIA, IBD, or CNO, age at diagnosis of under 19 years, and at least 2 visits with a study center rheumatologist or gastroenterologist due to the frequent nature of one-time second opinion visits. Subjects with a listed past medical history or diagnosis code of psoriasis prior to the diagnosis of JIA, IBD, or CNO were excluded.   TNFi exposure was defined as at least 1 prescription for either adalimumab, etanercept, or infliximab, and subjects were dichotomized as “ever” or “never” having TNFi exposure. The primary outcome was incident psoriasis which was defined as the first ICD-9 or ICD-10 code for psoriasis during a visit with a study center rheumatologist, gastroenterologist, or dermatologist. Subjects who had not developed psoriasis by their final recorded visit were considered censored. Incidence rates (IRs) were calculated as well as standardized incidence ratios (SIRs) comparing the observed to expected number of psoriasis cases in the general pediatric population according to previously published data. Univariate and multivariate Cox proportional hazards models determined by stepwise model selection were used to estimate the strength of association between TNFi exposure and incident psoriasis and to evaluate risk factors associated with psoriasis development. 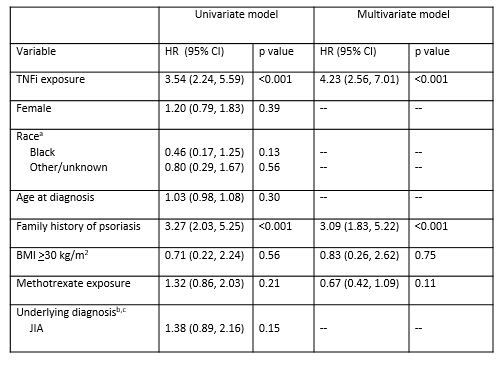