Background/Purpose: Patients with a chronic inflammatory disease (CID), particularly rheumatoid arthritis (RA), have an increased risk of fatal myocardial infarction (MI) and a diminished survival rate as compared to the general population. This risk might be explained, in part, by the systemic inflammatory process in CID. We investigated whether individuals with CID who developed a fatal myocardial infarction (MI) had an increased influx of inflammatory cells in different areas of myocardial tissue, as compared to individuals without CID.

Methods: Myocardial tissue of 11 individuals with CID (5 with RA, 4 with psoriasis, 2 with an inflammatory bowel disease) who died of a fatal MI were used. Controls were matched for age, gender and time elapsed between myocardial infarction and death. Myocardial tissue was immunohistochemically stained with specific antibodies against myeloperoxidase (neutrophilic granulocytes), CD45 (lymphocytes), CD68 (macrophages) and tryptase (mast-cells). Cell density (cells/mm2) was calculated for the right ventricular (RV) myocardium (internal control; remote area), left ventricular (LV-) myocardium free from MI (internal control) and left ventricular (LV+) myocardium of the MI for each stain. Differences in cell densities between the CID group and controls, and within these groups; between LV+, LV- and RV, were analysed using the non-parametric Mann-Whitney U test.

Figure 1. Bar chart depicting the difference in inflammatory cell density of several types of myocardial tissue and the presence of rheumatoid arthritis 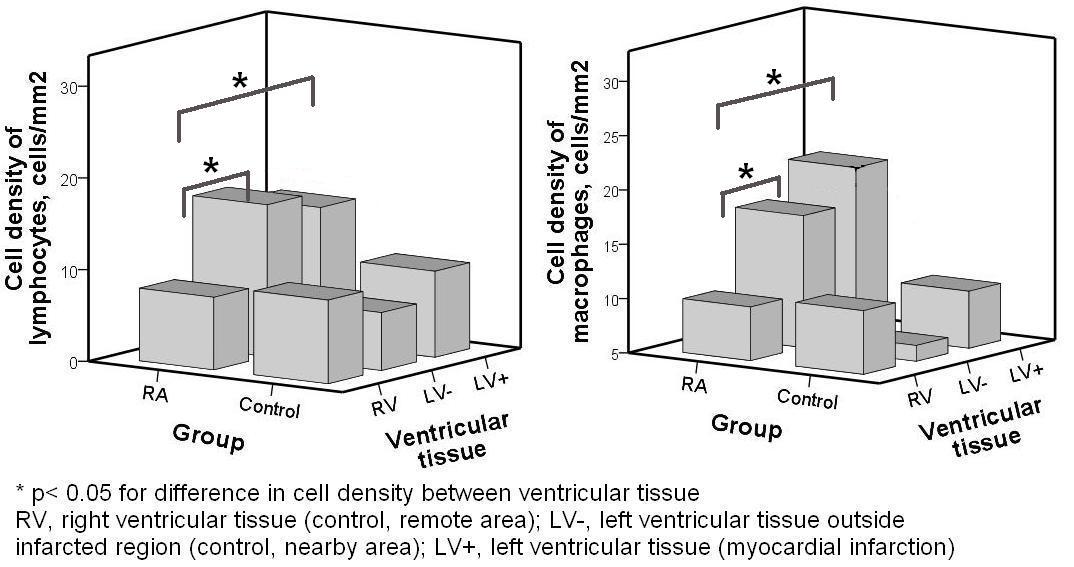