To analyze the effect of demographic and clinical related characteristics of rheumatoid arthritis (RA) patients in the immunomodulatory effects of mesenchymal stem cells (MSCs). The proportion of CD69+, CD25+, and regulatory T cells (Treg) among CD4+ peripheral blood mononuclear cells (PBMCs) was used as surrogate markers of immunomodulation.

MSCs donors: MSCs were obtained from bone marrow aspirates from the iliac crests of 6 healthy donors. Cells in the fourth passage were used in the experiments.

T cell cytometry: PBMCs were stained with anti CD4, anti CD25, anti CD69, and anti CD127 antibodies. The lymphocyte population was identified by side scatter/forward scatter. Treg cells were gated on the basis of CD4 expression, in combination with higher (bright) expression of CD25 and low/negative expression of CD127.

Statistical analysis: Influence of co-culture with MSCs and duration of culture in surface markers expression and Treg proportion was analyzed using repeated measures ANOVA (nested by RA patient) with the “lmerTest” R package. Coculture with BM-MSCs (yes/no) and time of culture (24h, 72h, 6 days) were the within-subject variables. An interaction between both was introduced in the analysis. Gender, age at inclusion, presence of RF, presence of ACPA, disease activity (DAS28-CRP: remission/low vs. moderate/high disease activity), current use of methotrexate, and current use of biological therapies were between subject variables. Triple interactions (adjusted by the BM-MSCs donor) among the within-subject variables and each between-subject variables were performed. P-values were adjusted using the FDR correction.

15 RA patients were collected. Interactions between co-culture and time were significant for CD69+, CD25+ and Treg proportion (p<0.0001 for each term). Only disease activity showed a significant interaction with time and co-culture in their influence in the proportion of CD69+ cells (p=0.003; Figure 1). In the post-hoc comparisons, patients in remission/low disease activity showed a higher expression of CD69 after 6 days of co-culture (p=0.017). 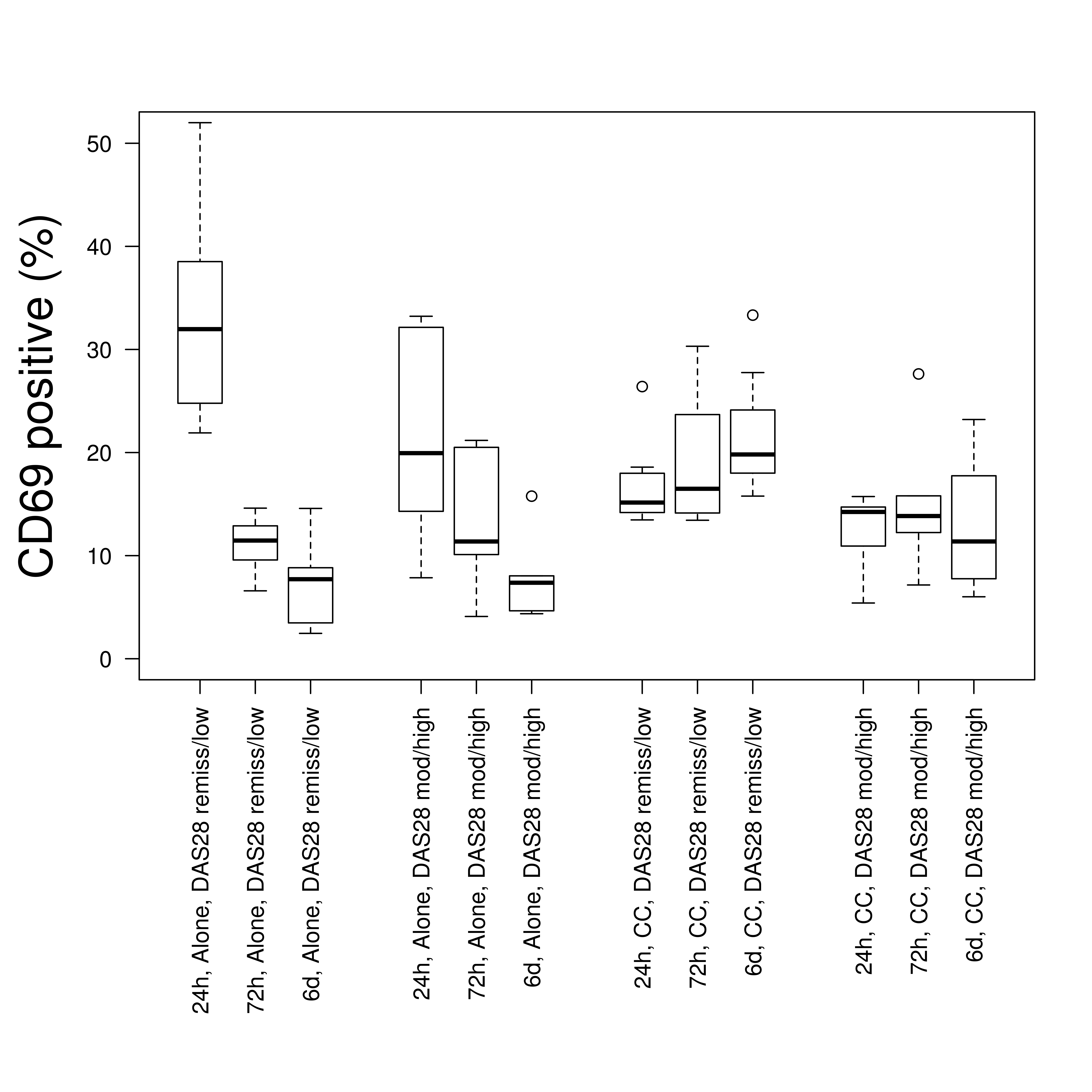