Background/Purpose: Fibroblast-like synoviocytes (FLS) may play a role in the pathogenesis of Juvenile idiopathic arthritis (JIA) and have chondrogenic potential. Bone morphogenetic proteins (BMP) are necessary for chondrogenesis. We have previously shown increased levels of BMP4 in JIA FLS.  Highly conserved antagonists of BMPs regulate signaling in both FLS and chondrocytes (Ch) by binding to BMP ligands but little is known about how these antagonists interact in JIA FLS. To examine regulation of BMP signaling in Ch and FLS, we studied gene expression levels of BMP antagonists gremlin (GREM), chordin (CHRD), noggin (NOG), and follistatin (FST), as well as the expression of these antagonists in Ch cultured in FLS conditioned media.

Methods: RNA was collected from three Ch, CFLS, and JFLS cell lines cultured in their respective media at 6, 12, and 24 hours. Concurrently, RNA was collected from three Ch cell lines cultured in conditioned media from CFLS or JFLS (Ch-CFLS and Ch-JFLS) at the same time points. Clariom S microarrays were performed on these samples and log ratios calculated using linear expression values for genes of interest.

Conclusion: Our results suggest that untreated Ch favor FST and family members as possible BMP signaling regulators but when cultured in FLS conditioned media, GREM, but not FST or CHRD, is upregulated in both Ch-CFLS and Ch-JFLS. FLS can influence chondrocytes by causing a change in the antagonist the cells use to regulate BMP signaling. Specifically, JFLS can influence Ch to downregulate CHRD and FSTL5 expression compared to Ch-CFLS. Perhaps JFLS, who have higher levels of BMP4 than CFLS, favor a more potent inhibitor like GREM, which is expressed more during late-stage chondrogenesis as opposed to FST, which is favored during earlier chondrogenesis (1). 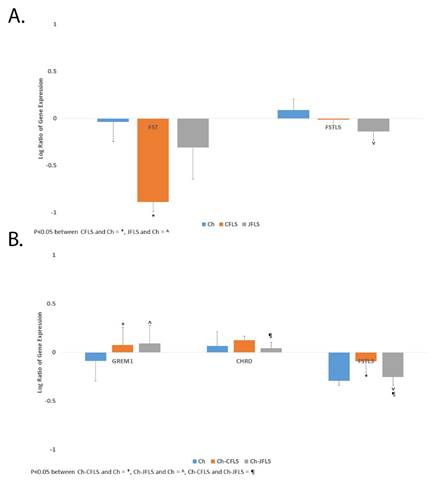