Background/Purpose: Fatigue is commonly described in chronic illnesses, especially in auto-immune disorders such as systemic lupus erythematosus (SLE). We aim to study the prevalence of fatigue in SLE patients with NP symptoms attributed to major nervous system involvement in SLE and other attributions.

Methods: All patients visiting the tertiary referral center for NPSLE in the LUMC between 2007-2019 with the clinical diagnosis of SLE and age >18 years that signed informed consent were included in this study. Patients underwent a standardized multidisciplinary assessment, including two questionnaires: SF-36 (2007-2019) and multidimensional fatigue index (MFI, 2011-2019). Patients were classified as NPSLE in this study if NP symptoms were attributed to SLE and immunosuppressive or anticoagulant therapy was initiated, otherwise patients were classified as minor/non-NPSLE. The vitality (VT) domain of the SF-36 domain was used to assess fatigue, which generates a score from 0-100, 100 representing the complete absence of fatigue. Patients with a score more than one standard deviation (SD) removed from age-related controls of the Dutch general population were classified as fatigued; patients more than two SD removed were classified as extremely fatigued1. The MFI was also assessed, which consists of five subdomain scores between 0-20, leading to a total score between 0-100, 100 representing the most extreme fatigue. All scores are presented as mean and SD.

The MFI questionnaire was available for 230 patients, of which 65 patients were classified as NPSLE (28%). Table 1 depicts the scores of NPSLE and minor/non-NPSLE patients on the MFI subdomains.

Conclusion: Nearly half of all patients with SLE and NP symptoms are extremely fatigued compared to only 2.5% of the general Dutch population.  Extreme fatigue is irrespective of NP attribution to SLE. 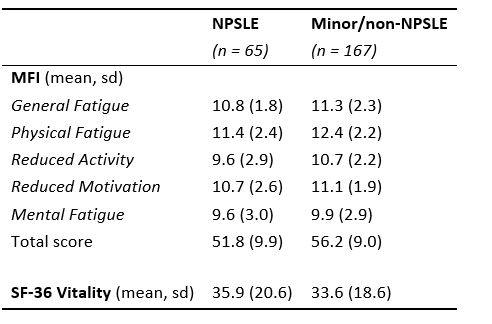