Background/Purpose: Giant cell arteritis (GCA) is an inflammatory disease of large vessels requiring long-term treatment with glucocorticoids. The immunopathology is characterized by vessel infiltrating innate and adaptive immune cells. In GCA, only limited data on dynamics in blood cell populations before, during and after treatment are available. Moreover, it is unknown whether patients that reached treatment-free remission are truly cured or are still suffering from ongoing subclinical vasculitis. This analysis aims to document effects of short and long-term glucocorticoid treatment on leukocyte subsets in this elderly population and may provide clues on the immunopathology of GCA.

Methods: Newly-diagnosed GCA patients (not yet on treatment, n=41) were prospectively studied for a median of 914 days. Absolute numbers of leukocyte subpopulations and other standard lab parameters were measured at fixed time points. Values were compared with age-matched healthy controls (n=52). Treatment free remission was defined as absence of symptoms without immunomodulatory treatment for at least 6 months.

Results: Platelet counts and inflammatory markers CRP and ESR were significantly increased in newly-diagnosed GCA patients compared to healthy controls. Monocyte and neutrophil counts were, while NK-cells were decreased. CRP and ESR, correlated with monocyte counts, only.
During short-term treatment (up to 3 months), most cell populations decreased but neutrophils and B-cells increased compared to baseline GCA.
After 12 months of treatment, T-cells, NK-cells and neutrophils returned to baseline GCA levels, while B-cells and monocytes were decreased. When compared to healthy controls monocytes and neutrophils were significantly increased after 12 months of treatment while B-cells, CD4+ T-cells and NK-cells were decreased.
In samples of GCA patients in treatment-free remission, innate immune cells did not normalize to healthy control levels. Monocytes and  neutrophils remained significantly increased, whereas NK-cells remained decreased.

Conclusion: In GCA, innate rather than adaptive immune cells show major fluctuations before and during treatment. These fluctuations in innate immune cells persisted even in treatment-free remission. Whether this reflects development of a new immune balance or an ongoing subclinical vasculitis remains to be investigated. 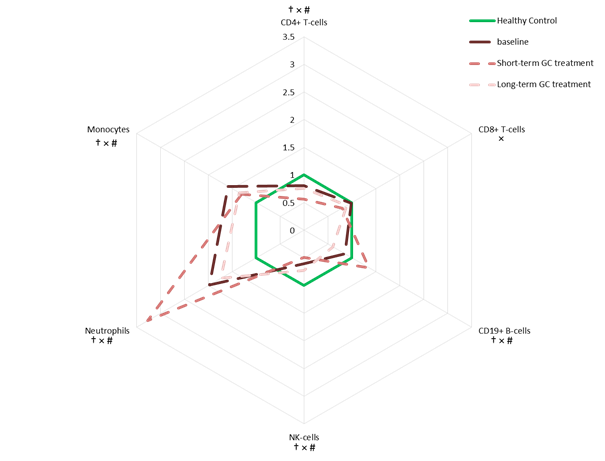