Background/Purpose: Targeted treatments for neuropsychiatric systemic lupus erythematosus (NPSLE) remain challenging to develop due to the unclear pathogenesis of the disease. Our laboratory has previously identified tertiary lymphoid structure (TLS) (a.k.a. ectopic germinal center) formation in the brains of MRL/lpr mice, a classic SLE mouse model with neuropsychiatric manifestations. TLS form at sites of chronic inflammation and functionally perform like other lymphoid follicles to create clonotypic immune responses in a localized fashion. This specialized immune response may target self-antigens in autoimmune conditions and perpetuate pathogenesis of disease. CXCL13 is a key chemokine in lymphoid follicle formation and maintenance; in this study, we inhibited CXCL13 in MRL/lpr strain and examined the effect of this intervention on TLS formation and the development of neurobehavioral deficits.

Methods: MRL/lpr mice share several important similarities with human lupus, including ANA production, widespread immune complex deposition, nephritis, and skin disease. Importantly for this study, this strain also exhibits early onset of cognitive and affective disease similar to that seen in NPSLE patients. Female MRL/lpr mice were injected with a CXCL13-neutralizing monoclonal antibody (Vaccinex), an IgG1 isotype control antibody, or PBS intraperitoneally (IP) three times a week for 12 weeks starting at 6-8 weeks of age (n=13-19 per group), or continuously intracerebroventricularly (ICV) with an osmotic pump, over a two-week period starting at 15 weeks of age (n=4-5 per group). Cognitive dysfunction and affective deficits were tested for at the end of treatment using object placement (OP) and object recognition (OR) tasks to evaluate spatial and recognition memory, respectively, and using Porsolt swim test to evaluate depression-like behavior. Anti-DNA antibody titers and serum blood urea nitrogen (BUN) levels were assessed to measure systemic disease progression at the time of the behavioral tests.

Conclusion: Our results suggest that inhibition of TLS formation affects the behavioral phenotype but not systemic or renal disease in the lupus prone MRL/lpr strain. Therefore, CXCL13 overexpression contributes to the pathogenesis of murine NPSLE and suggests that neutralizing this chemokine, if it can be done locally and safely, may be a novel therapeutic approach to the treatment of this manifestation. 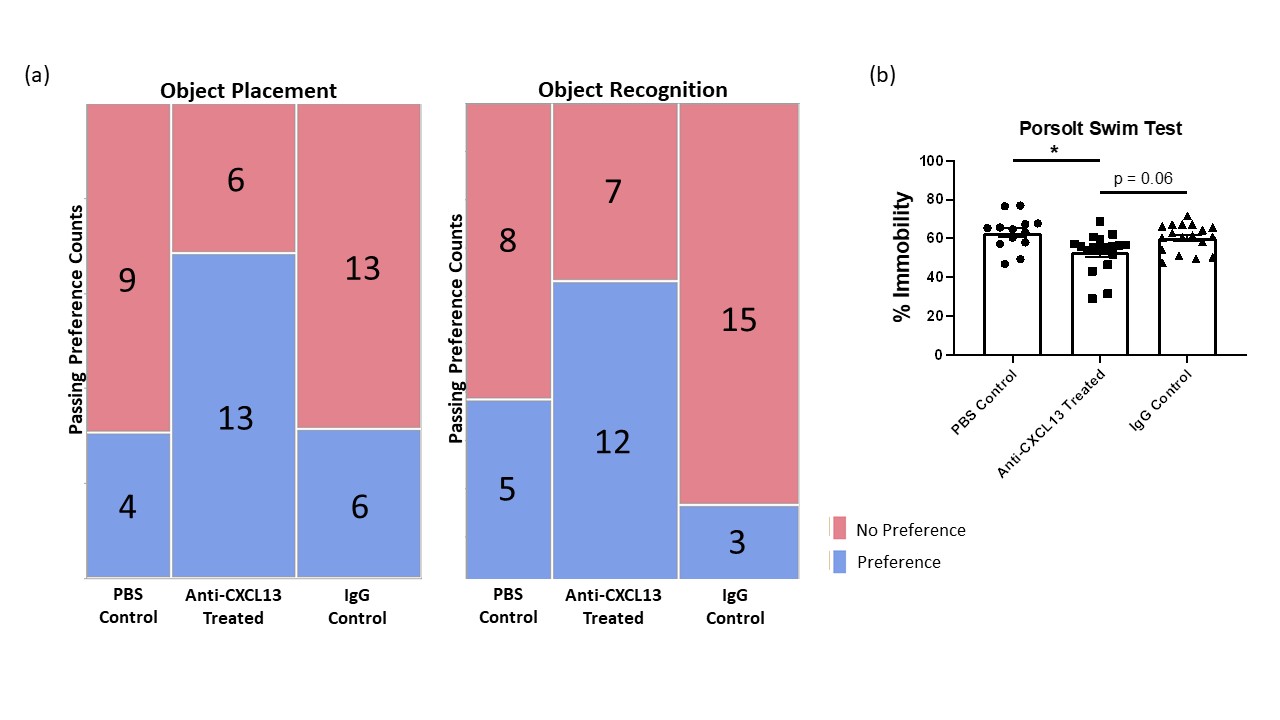 Figure 1. Behavioral Test Results (for IP cohorts). (a) Object placement (OP, left) and object recognition (OR, right) tasks are measured by animals showing over a 55% preference to a novel object. Counts of mice separated into either showing a preference (blue) or no preference (red). Both tasks showed that the treatment group performed significantly better than both the PBS control group (OP: p=0.034; OR: p=0.17) and the IgG control group (OP: p=0.022; OR: 0.0031). (b) Depression-like behavior is measured by percent time spent immobile over the total time in the Porsolt swim test. The treatment group demonstrated significantly less despair-like behavior than both groups (vs PBS: p=0.012; vs IgG: p=0.063; error bars: SEM).