Background/Purpose: In 1998, the first biologic disease modifying antirheumatic drug was approved in the United States for the treatment of RA. Since that time, biologics have become the standard of care for patients with moderate to severe RA. However, there is limited information on the general impact of biologics on the long term functional status of the RA population. This study examined baseline characteristics from patients enrolling in randomized clinical trials (RCT) from 1987 to 2012 to estimate changes in RA patient functional status following the introduction of biologics.

Methods: A systematic literature review was conducted in the Medline and Embase databases from 1987 to 2012 to identify RCTs enrolling RA patients that reported a baseline Health Assessment Questionnaire (HAQ) score. Weighted means for patient baseline characteristics reported in RCTs were used to construct multivariable linear regression models to examine predictors of change in RA patient functional status over time.

Results: A total of 51 RCTs were identified that met all study requirements; 36 RCTs allowed for weighted mean calculations and were included in the analyses. Correlation analyses and Regression models exploring the association between patient functional status and year of RCT publication were performed for five outcomes: HAQ, disease activity score (DAS-28), tender and swollen joint counts (TJC and SJC), and Sharp scores. Correlational analyses showed an inverse relationship between mean DAS-28 or SJC and year of publication over the study period. Other outcomes (HAQ and TJC) only presented a significant inverse relationship with year of publication for subset of the study period, 2005-2012. Linear regression models for DAS-28 and Sharp scores used all eligible data; models for HAQ, TJC, and SJC were developed using data from 2005-2012 (Table 1). Best fit linear regression models revealed year of publication to be a significant predictor of increased functional status scores over time for all outcomes; increased age was also a predictor of increased functional status in 4 of the 5 models.

Conclusion: Patient baseline characteristics in RCTs from 1987 to 2012 were used as a proxy to assess changes in the functional status of the RA population over time. The increase in the functional status of the RA population observed after the period that biologics became available suggests that biologics have been effective in managing disease and reducing disease severity within the RA population. Disclosure: B.S., and D.C. are employees of Amgen. B.B. and N.G. are employees of Health Analytics, LLC who was contracted by Amgen to conduct this study. 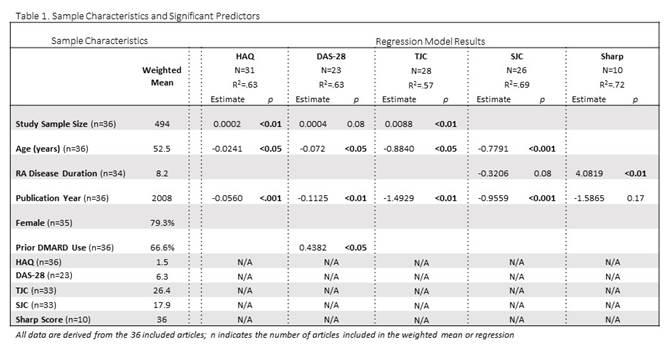