Smoking is well recognized as a risk factor for rheumatoid arthritis (RA), and determinant of RA disease activity, severity, response to therapy, and possibly mortality. However, long-term data on flare rates in RA among patients with smoking history are lacking. The purpose of this study was to assess trends in the occurrence of flares and remissions in RA among smokers and non-smokers.

A population-based cohort of patients with RA (age≥18 years; 1987 ACR criteria met in 1988-2007) was used to perform this retrospective medical records review of each clinical visit to estimate flare and remission status. RA flare was defined as any worsening of RA activity leading to initiation/change/increase of therapy (OMERACT 9). Remission was defined as the absence of disease activity (i.e. tender joint count [TJC] = 0 + swollen joint count [SJC] = 0 + ESR ≤ 10 mm/hr) (OMERACT 7). All subjects were followed until death, migration or July 1, 2012. Binomial regression models with random effects to account for multiple visits per subject were used to assess the association between smoking status and flare/remission rates adjusting for age, sex, and calendar year. Smoothing splines were used to allow for non-linear effects. Two way interactions between RA disease duration and smoking status were examined.

In this long term followup study, current smokers have higher rates of flares compared to non-smokers. Concordantly, remission rates were lower in smokers compared to the non-smokers. Smoking adversely affects RA flare/ remission. These findings should be helpful in counseling patients with RA who smoke. 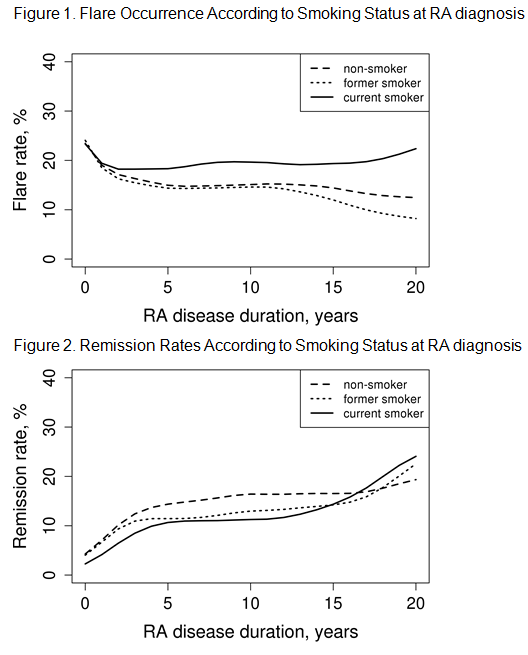